Are Giuliani, Bolton, and the other speakers of the Mojahedin-e Khalq ceremonies involved in this case? 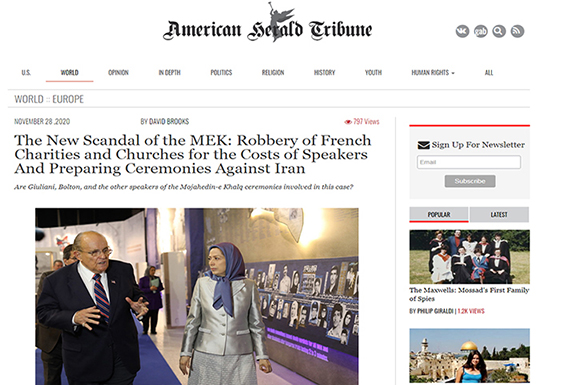 The cost of financing the speeches of Giuliani, Bolton, parliamentarians, etc. in the Mojahedin-e Khalq ceremonies, the cost of financial aid to parties such as the Spanish Right Party (Vox), the cost of some reputable media to cover the Mojahedin-e Khalq news, etc. raise an important question in the minds of many journalists that where is the source of financing these expenses, which cannot be afforded by many prominent and profitable companies in the world, and where does the MEK provide this money?

Although some journalists claimed Saudi Arabia and Israel had provided financial assistance to the group, even these actors could not afford the huge costs due to budget constraints.

Journalists were looking for answers in 2003 when the French security system arrested many of the group’s cadres, but the case remained closed for obscure reasons.

Now, two decades after the 2003 arrests, a member of the group, Yaghoub Meraji, announced on his Twitter that he had worked for the Mojahedin since the beginning of the Iranian revolution and returned to France after the joint Mojahedin-Saddam war against Iran and has been present in the bases of this cult, intends to refer to the French police and present his information and knowledge about the abuse of this group of French charities and churches of that country and money laundering of the group, and file a lawsuit against a group of which he was once a member.

Meraji can now be a key figure in the financial case of Mojahedin-e Khalq and the individuals and parties that have received money from this group.

If Meraji’s statement is true, that part of the cult’s expenses was covered by the misuse of charities and churches, that is, the money that should have paid to the socially damaged individuals would have been the cost of travels and accommodations and speeches by prominent political figures such as Giuliani, this case seems to be much more important than the Mojahedin-e Khalq case of money laundering and fraud, and the entry of political observers of France and other European and American countries are necessary, which should examine why some politicians, despite political experience and sufficient knowledge of legal capacities of the parties and groups, with what justification, despite the many ambiguities about the financial activities of the Mojahedin-e Khalq, participated in the ceremonies of this group and received money from it.

All these answers are subject to the official comment of the French security systems on the veracity of Mr. Meraji’s statements and after that, the monitoring organizations would enter the field of investigating the dark and ambiguous activities of some parties and individuals related to MEK.