In a very unprofessional gaffe, the English website of the Mujahedin Khalq Organization (the MKO) publishes a photo absolutely unrelated to the so-called news about Iranian teachers.

The text of the alleged news quotes what it calls “independent reporters” reporting that “dozens of Iranian teachers took part in a rally in Hamedan, western Iran on Friday, demanding their basic rights and also the release of imprisoned teachers”. Surprisingly, a photo of teachers’ walking program in Hamedan with the fake caption reveals the misinformation campaign of the MKO propaganda.

While the MKO’s news claims that the teachers held up banners “which pointed out that their colleagues were being arrested in Iran simply for demanding their basic rights, such as fair wages,” teachers in the photo are carrying a banner in Persian with these exact words: “Family walking gathering of teachers of Hamedan Province”! The banner also includes the exact date and itinerary of the walking program. In addition, people in the picture include men, women and children walking peacefully on the side walk of the street. 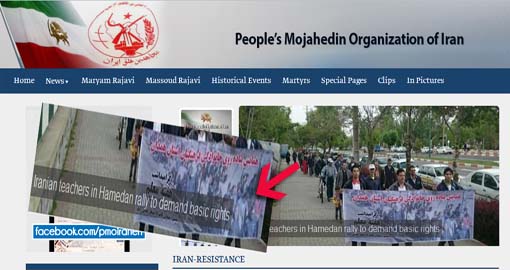