It’s a time when we reflect on our gratitude for the past and our hopes for the future. And it’s a chance to 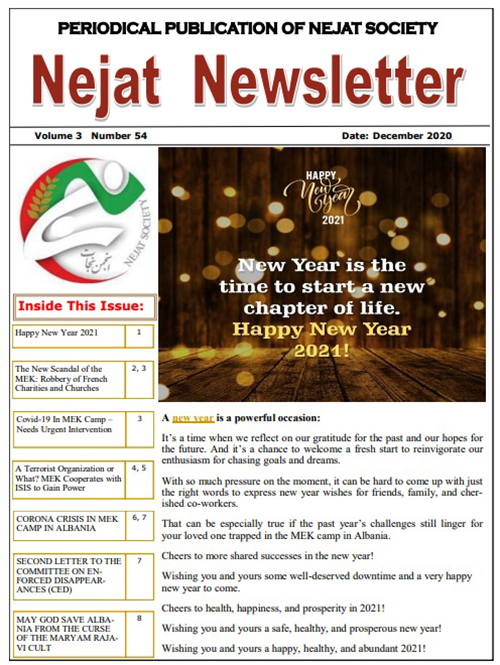 welcome a fresh start to reinvigorate our enthusiasm for chasing goals and dreams.

-The New Scandal of the MEK: Robbery of French Charities and Churches

We would like to inform you that we, a group of former members of the MEK Organization, are concerned about the situation of our former friends who are currently members of the MEK. During the outbreak of COVID-19, the organization keeps its members in a closed area, which makes the conditions more dangerous for the spread of this disease among people….

-A Terrorist Organization or What? MEK Cooperates with ISIS to Gain Power

The Mojahedin-e Khalq terrorist group has been constantly changing its face since 2003 with the fall of Saddam Hussein, and has used every means to abuse its host, and always turning its back on its host in critical moments. They have used every means to strike at their country, such as collaborating with Saddam in the war against Iran, collaborating with the United States and Israel and killing Iranian nuclear scientists,….

On behalf of the suffering families of members of the Mojahedin-e Khalq Organization (MEK, MKO, NCR, NLA), I would like to draw your attention to an emerging humanitarian catastrophe due to the spread of Covid-19 in the MEK’s closed and isolated Camp Ashraf 3 in Manez, Albania….

-SECOND LETTER TO THE COMMITTEE ON ENFORCED DISAPPEARANCES (CED)

In your communications about the complaints of the families of the members of the Mojahedin-e Khalq Organization (MEK, MKO, NCR, NLA) against the Albanian government you have responded that: “The Committee on Enforced Disappearances (CED) is the body of independent experts which monitors implementation of the Convention by the State Parties.”

Dr. Olsi Jazexhi discusses with Gjergji Thanasi the threat that Albania is facing after the assassination of Dr. Mohsen #Fahkrizadeh in Tehran by a terrorist group. They discuss the possible involvement of the Iranian Mojahedins and their leader #MaryamRajavi in this terrorist attack and the dangers that this terrorist action brings to Albania.