MEK grows Khashoggis in Ashraf 3 or VIPs of Albania?
Mazda Parsi in Nejat Bloggers points out that MEK’s relocation to Albania brought the cult into the focus of 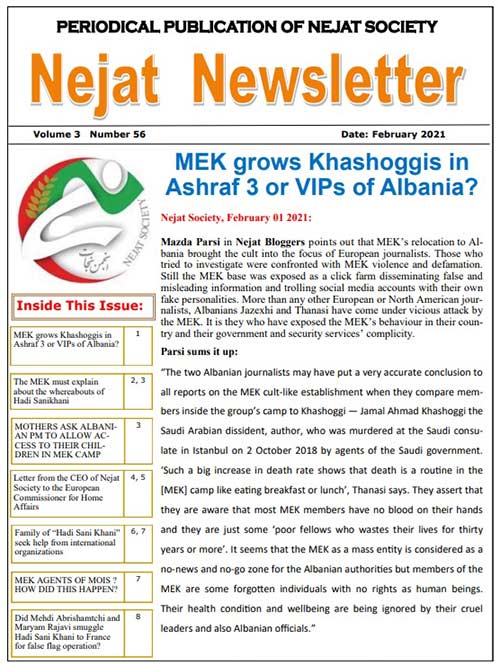 European journalists. Those who tried to investigate were confronted with MEK violence and defamation. Still the MEK base was exposed as a click farm disseminating false and misleading information and trolling social media accounts with their own fake personalities. More than any other European or North American journalists, Albanians Jazexhi and Thanasi have come under vicious attack by the MEK. It is they who have exposed the MEK’s behaviour in their country and their government and security services’ complicity….

The MEK must explain about the whereabouts of Hadi Sanikhani.
The recently published letter on the MEK websites,allegedly signed by Hadi Sanikhani, has raised concerns over the fate of this former member of the group.The letter was published by the so called Security and Counterterrorism Committee of the National Council of Resistance which is the political vitrine of the Cult of Rajavi (aka Mujahedin Khalq, MEK, MKO, PMOI)….

MOTHERS ASK ALBANIAN PM TO ALLOW ACCESS TO THEIR CHILDREN IN MEK CAMP
… I have been informed that the Albanian government is one of the signatories of the “United Nations International Convention for the Protection of All Persons from Enforced Disappearance”.

Letter from the CEO of Nejat Society to the European Commissioner for Home Affairs
Ebrahim Khodabandeh ,CEO of Nejat Society, Iran, wrote a letter to the European Commissioner for Home Affairs, Ylva Johansson, calling on her to raise with the Albanian authorities the issue of abuse of the most basic human rights of members and former members of the Mojahedin-e Khalq Organization (MEK, MKO) in Albania.

Family of “Hadi Sani Khani” seek help from international organizations
Father of Hadi Sani khani,who defected from the Mojahedin-e Khalq Organization (MEK, MKO) in Albania, sent a letter to the SecretaryGeneral of the United Nations and other international and European bodies, as well as Albanian government officials, expressing growing concern over his son’s enforced disappearance in Albania. He and his wife requested that this issue be dealt with….

MEK AGENTS OF MOIS ? HOW DID THIS HAPPEN?
In the language of espionage, agent is a person who is unofficially employed by an intelligence service, often as a source of information. However, in the language of the Mujahedin Khalq Organization (the MKO/ MEK/ PMOI/ Cult of Rajavi), agent is a person who defects the group, criticizes the group and gives testimony against it….

Did Mehdi Abrishamtchi and Maryam Rajavi smuggle Hadi Sani Khani to France for false flag operation?
Dr. Olsi Jazexhi and Gjergji Thanasi comment the latest scandal of the Mujahedin-e Khalq ex-Terrorist Organization, MEK, MKO, Rajavi Cult in Albania. In the past weeks the Mojahedens are believed to have trafficked into France an Iranian ex-terrorist foreign fighter, Hadi Sani Khani…
To view the pdf file click here