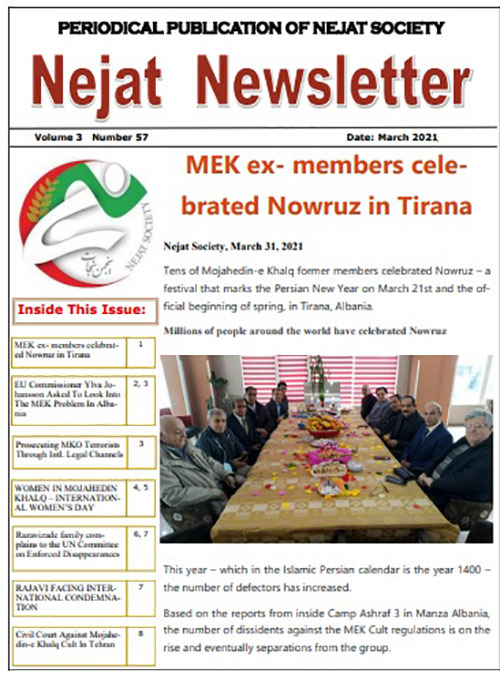 – Prosecuting MKO Terrorists Through Intl. Legal Channels
These people are former members of the most notorious anti Iran terrorist group, known as the MKO or Mojahedin-e Khalq Organization. They fled the group years ago after spending two decades in the MKO under duress. They have now filed a lawsuit at an Iranian court against leaders of the terror group, namely Masoud and Maryam Rajavi.

– Razavizade family com plains to the UN Committee on Enforced Disappearances
We are the sister (Robabeh) and brother (Seyed Abbas) of Seyed Hossein Razaviza deh Bahabadi. We have not seen our brother for almost 37 years and now we want to file our complaint against the Albanian government under the UN International Con vention for the Protection of All Persons from En forced Disappearance, of which the Albanian govern ment is a signatory…

– RAJAVI FACING INTERNATIONAL CONDEMNATION
On 12th March 2021, several ex-MEK member organisations from Paris gathered together and sent a delegation to the Albani an embassy in Paris. They had a brief meeting with the deputy ambassador and arranged a formal meeting with the ambassador at a later date. In this conversation they handed over some docu ments and a statement to be passed to PM Edi Rama’s office.