The analytic statement of Nejat Society related to the recent report of US State Department The Iranian Mojahedin-é Khalq (MEK) remains on US terror list, a vital step towards the final destination: The US State Department Office of the Coordinator for Counterterrorism on April 30 released the list of designated terrorist organizations. Once again Mujahedin-é Khalq Organization (as well as the National Council of Resistance and the National Liberation Army) continues to occupy the status it has been designated since 1997.

The highlights of the report are as follows:

– The MEK advocates the violent overthrow of the Iranian regime and was responsible for the assassination of several U.S. military personnel and civilians in the 1970’s.

– MEK leadership and members across the world maintain the capacity and will to commit terrorist acts in Europe, the Middle East, the United State, Canada, and beyond.

– The MEK emerged in the 1960s as one of the most violent political movements opposed to the Pahlavi dynasty and its close relationship with the United States.

– MEK ideology has gone through several iterations and blends elements of Marxism, Islam, and feminism.

– The group rapidly fell out of favour with the Iranian people

– The group has planned and executed terrorist operations against the Iranian regime for nearly three decades from its European and Iraqi bases of operations.

– It has expanded its fundraising base, further developed its paramilitary skills, and aggressively worked to expand its European ranks.

– In addition to its terrorist credentials, the MEK has also displayed cult-like characteristics. Upon entry into the group, new members are indoctrinated in MEK ideology and revisionist Iranian history. Members are also required to undertake a vow of "eternal divorce" and participate in weekly "ideological cleansings." Children are reportedly separated from parents at a young age.

– MEK leader Maryam Rajavi has established a "cult of personality." She claims to emulate the Prophet Muhammad and is viewed by members as the "Iranian President in exile."

– The group’s worldwide campaign against the Iranian government uses propaganda and terrorism to achieve its objectives and has been supported by reprehensible regimes, including that of Saddam Hussein.

– The MEK instigated a bombing campaign, including an attack against the head office of the Islamic Republic Party and the Prime Minister’s office, which killed some 70 high-ranking Iranian officials, including Chief Justice Ayatollah Mohammad Beheshti, President Mohammad-Ali Rajaei, and Prime Minister Mohammad-Javad Bahonar.

– For five years (1981 – 1986), the MEK continued to wage its terrorist campaign from its Paris headquarters.

– MEK leaders turned to Saddam Hussein’s regime (1986) for basing, financial support, and training. Near the end of the 1980-1988 Iran-Iraq War, Baghdad armed the MEK with heavy military equipment and deployed thousands of MEK fighters in suicidal, mass wave attacks against Iranian forces.

– The MEK’s relationship with the former Iraqi regime continued through the 1990s. In 1991, the group reportedly assisted in the Iraqi Republican Guard’s bloody crackdown on Iraqi Shiites and Kurds who rose up against Saddam Hussein’s regime; press reports cite MEK leader Maryam Rajavi encouraging MEK members to "take the Kurds under your tanks."

– In April 1992, the MEK conducted near-simultaneous attacks on Iranian embassies and installations in 13 countries, demonstrating the group’s ability to mount large-scale operations overseas.

– In April 2000, the MEK attempted to assassinate the commander of the Nasr Headquarters. The pace of anti-Iranian operations increased during "Operation Great Bahman" in February 2000, when the group launched a dozen attacks against Iran. One of those attacks included a mortar attack against a major Iranian leadership complex in Tehran that housed the offices of the Supreme Leader and the President.

– In 2000 and 2001, the MEK was involved in regular mortar attacks and hit-and-run raids against Iranian military and law enforcement personnel, as well as government buildings near the Iran-Iraq border.

– In 2001, the FBI arrested seven Iranians in the United States who funnelled $400,000 to an MEK-affiliated organization in the UAE which used the funds to purchase weapons.

– Since 2003, roughly 3,400 MEK members have been encamped at Ashraf in Iraq, under the supervision of Coalition Forces.

– In 2003, French authorities arrested 160 MEK members at operational bases they believed the MEK was using to coordinate financing and planning for terrorist attacks.

– Upon the arrest of MEK leader Maryam Rajavi, MEK members took to Paris’ streets and engaged in self-immolation.

– According to evidence which became available after the fall of Saddam Hussein, the MEK received millions of dollars in Oil-for-Food program subsidies from Saddam Hussein from 1999 through 2003, which supported planning and executing future terrorist attacks. In addition to discovering 13 lists of recipients of such vouchers on which the MEK appeared, evidence linking the MEK to the former Iraqi regime includes lists, as well as video footage of Saddam Hussein handing over suitcases of money to known MEK leaders, and video of MEK operatives receiving training from the Iraqi military.

The report is by no means inclusive and some essential factors are deliberately missing. The evidential fact that the group celebrated the 11th of September terrorist incident in their camp in Iraq with the presence of Massoud and Maryam Rajavi has not been mentioned. Many former MEK members, both inside and outside Iran, have repeatedly testified the very fact that Maryam Rajavi in a meeting of about 2000 MEK members in Iraq praised the catastrophe and called it to the best interests of the MEK. The group’s present links with extremists in Iraq and former Iraqi Ba’th Party elements has not been mentioned in this report either. The US State Department should have referred to existing documented reports in order to let the actual facts be known by the people, as well as being recorded in the history.

In this report the “expatriate Iranian communities” have been referred to as the organisation’s present financial source. The truth is that the organisation, similar to many cults alike, is using cover societies to swindle people and absorb their financial aids by using deception and fraud.

Nevertheless the facts revealed in the report clearly prove that the group is a major threat for western citizens as well as Iranians and Iraqis. The report emphasises that the MEK is a personality cult and Maryam Rajavi is praised like an idol and the organisation is capable of executing terrorist acts in western countries.

Referring to this report and the Iraqi authorities decision that the members of MEK must be expelled from Iraq and the inhabitants of Ashraf Camp be freed, one may ask that why that decisive step is not taken. The State Department has revealed the nature of this group which leaves no doubts that the members of the group are the prime victims of a cult and their presence in Iraq has given the chance to the leaders to isolate them from their families and the outside world.

In one word the US State Department’s report describes MEK as a destructive terrorist cult. In this case, would it not be better to help the captive members of a dangerous cult to be saved from a horrific citadel and return to their families? The leaders of the cult must not be permitted further to keep their recruits as hostages using mind manipulation and then force them to commit self immolation and further immolating others. The official statement of the State Department is a grave and severe obstacle on the way of those who have aimed to play Saddam Hussein’s role for the MEK and to utilize this aggressive cult as “good terrorists”. Let’s hope that this process would end to the freedom of all captive recruits of the MEK.

Nejat Society calls upon all western countries particularly the US administration to take decisive measures to safeguard the future of those still captive in Ashraf Camp in Iraq and let them choose their own destiny and do not enter into the dangerous double standard policy of serving the MEK leaders the same way Saddam Hussein once did. 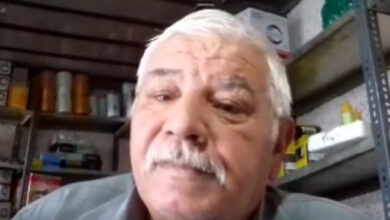