Zahra Moeini, former member of the Mujahedin Khalq Organization (MEK/ MKO/ PMOI/ NCRI/ Cult of Rajavi) was in charge of taking care of the children who have been smuggled by the MEK agents from Iraq to Germany during the first Gulf war.

Zahra Moeini got to know about the MEK immediately after she married her ex-husband, a member of the MEK, in Iran. In 1987, the newlyweds, Zahra and her husband joined the MEK in Iraq where they received military trainings and were made to attend cross border operations against Iranian forces. Zahra was wounded in an operation. She was then sent to Europe where she worked in the MEK’s so-called “financial-social section”.
Their duty was to raise funds for the group in the streets of Köln and Berlin by showing pictures of alleged Iranian orphans. The fake charity organizations founded by the MEK was later condemned by German government but the MEK leaders could raise large amounts of money by deceiving both German authorities and citizens.
In 1991, when the coalition forces invaded Iraq, Massiud Rajavi ordered his commanders to transfer about nine hundred children of the Mujahedin to Europe. The children included from new-born infants to 14-year-old teenagers. “They made fake passports for the children and smuggled them from Jordan to Europe,” Zahra Moeini says in a recent interview with Mardom TV.

Poor life conditions, forced labor
In Germany, Zahra Moeini was ordered to serve in a three-story house of the MEK in which 50 children were kept in four rooms. “There were only six rooms,” she explains. “Two of them were for the commanders of the base and the fifty children had to stay in the other rooms. They had to sleep on the floor too tightly next to each other. In the morning they had to stay in a long line to go to the bathroom.”
According to Zahra’s testimonies, the children of the MEK were kept under poor sanitary conditions and poor food hygiene. She says, “The bread was always stale. It was actually the stale bread that the bakeries wanted to send for animals that the MEK agents took them for free. We had to put the bread in the oven before feeding the children.”
The children were supposed to cooperate in the choirs around the house. “They were always tired,” Zahra says. “We had to take them to school by bus. The commanders intentionally enrolled the kids at schools far from the house. They fell asleep at school. Their teachers asked us about the reason. These children had to work hard at home. There was no washing machine. They had to wash their clothes. They had to help with preparing foods. For example, in the weekends children had to peel a lot of eggplants or other stuff.”
The children also had to work in the streets to raise fund for the MEK. They were actually workers of the financial-social section too. 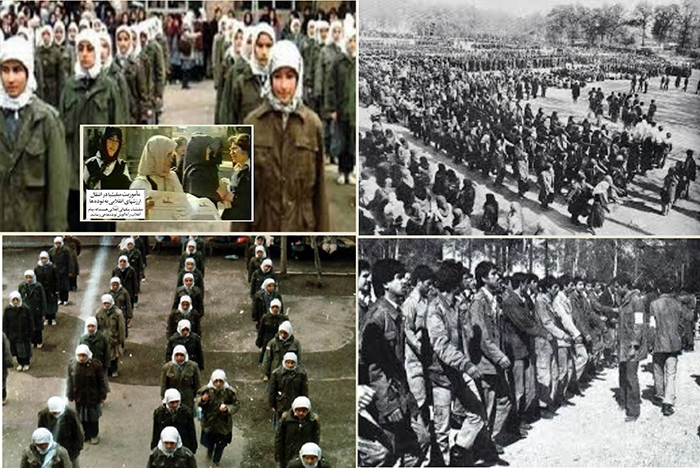 Maltreatment
Children of Mujahed parents had to be trained as Mujahed. The leaders of the MEK had planned to train them as what they called “militia” so they were treated as young soldiers. They had to sleep alone. They did not have the right to miss their parents. They did not have the right to ask about their parents. The only letters they receive were from “Uncle Massoud” and “Aunt Maryam” –Massoud and Maryam Rajavi the leaders of the group.
Zahra Moeini recalls some of those kids who missed their mother and cried all night. “They asked me to sleep by their side but the commander of the base did not allow me to get closer to them. If I expressed affection for the kids, I would be punished for not being strict enough to them.”
These distressed children had different problems. One of the problems was bedwetting that resulted in verbal and physical punishments for children. “A woman named Razieh, was really cruel. She shouted at the kid, beat her in the hip and verbally abused her,” Zahra says about the 7- to 8-year-old girl who had wetted her bed.

MEK leaders stole Children’s money
The MEK leaders kept children under such poor conditions while German government has one of the most reliable care systems for children in the world. The child benefit is a monthly payment given to all parents in Germany, regardless of their income, to ensure that their children’s basic needs are covered. As Zahra Moeini presents the documents, at the time, the child allowance paid by German government was about 600 marks for each child but the money was confiscated by the MEK leaders. The children had no personal property.
“Every weekend a group of ten children were allowed to go shopping,” Zahra says. “We took them to a store. Each kid was allowed to shop something for only one mark! The poor child who was watching different snacks and foods, tried to choose something that she could share with her other friends at home. For example, she chose cookies because she could share it with other children who could not go shopping at that weekend.”
Based on Zahra’s evidences, no clothes were bought for the children. “Although the German government gives annual payments to families for buying clothes for children, the clothes of MEK’s children came from charity organizations or the Red Cross,” she says.

The testimonies of Zahra Moeini are nothing of new. A perfectly detailed account of the life of children in the MEK‘s team houses in Germany was written by another MEK defector, Nadereh Afshari, in the 1990s. Like Zahra Moeini Nadereh Afshari was also an unpaid teacher and baby sitter for the MEK’s children. The book written by the deceased Nadereh Afshari is titled “Love Forbidden”. It gives a huge number of cases of children, particularly girls, who became victims of the Cult of Rajavi in different ways.