Nejat Families sought to contact their loved ones in the cult of Mujahedin Khalq in the video meeting with ASILA.
In meeting, between families of Nejat Society in Lorestan province, Iran and members of the association for the support of Iranians living in Albania (ASILA), in Albania, the case of hostages of the MEK was regarded as a humanitarian issue.

As the Iranian head of ASILA, Hassan Heirani started the meeting reporting that the actions of his society are accomplished under the regulations and protection of the Albanian government in contrast with the illegal activities of the MEK against its own current and former members in the soil of Albania. “The Albanian security service has come to know that the MEK is a dangerous entity that makes efforts to obstruct the activities of defectors.” 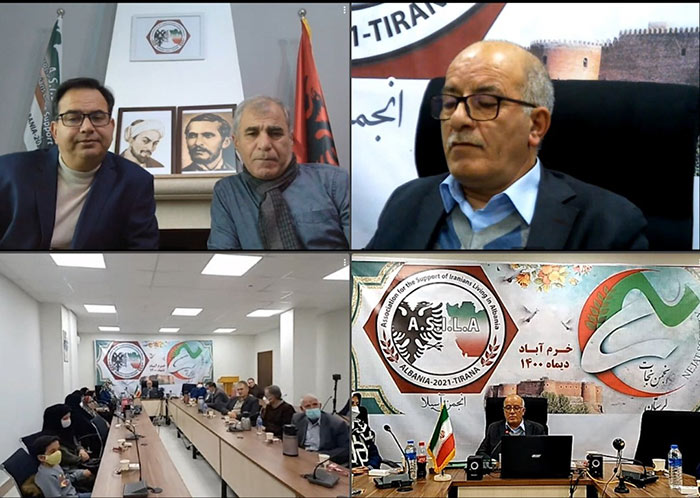 A number of family members of MEK hostages who have been present in the meeting spoke of their grieves during the dozens of years of separation.
Weeping tears, the sister of Forouzaned (Zhila) Kakavand said, “We have had no news of my sister for 40 years. Based on which rule, religion or doctrine, contacting your family is considered a crime? The international human rights bodies just kept silent regarding the pains and grieves we have endured in these 40 past years.”
The brother of Abbas and Musa Faraji was on the verge of bursting into tears. “There is no convincing reason to prevent a person from contacting his or her family,” he said. Emphasizing on the sufferings of families of MEK members, he asked ASILA authorities to aid families contact their loved ones in the MEK’s camp in Albania.
Another sister spoke of the grieves of her family in the absence of Houshang Goudarzi who was an army soldier in the Iran-Iraq war and was deceived by the MEK recruiters when he was a POW in Iraqi camps. “I don’t know how the MEK agents deceived my young brother. We have been awaiting his return for 32 years,” she said.
The Albanian head of ASILA Dashamir Mersuli who is the advocate of the Iranians living in Alibania, also addressed the Iranian families in the room, expressing hope for the release of their loved ones who are taken as hostages in the MEK. “I love Iranians,” he said. “I hope that everything will go right for both defectors of the group and those who are in the group but are willing to depart. I understand the problem. It is a complicated problem that will be solved gradually.”

Families of Alireza Arjmandi, Zahra Qasemi and Mohsen Shojai asked about the conditions of their loved ones. Rahman Mohammadian, former member of the MEK and a current member of ASILA informed the families about their loved ones as far as he knew. “We see them in the streets of Tirana from time to time but they cannot get close to us. We just wave secretly to them. They are always under the supervision of their commanders and if they communicate with us, they will be interrogated by their commanders in the group. We don’t want them to get into trouble so we do not go near when we see them in the streets.”

The authorities of ASILA and Nejat Society office in Lorestan expressed their commitment to support families in order to pave their way to contact their beloveds in the Cult of Rajavi.