– Amir Parvizi’s family call on the Albanian prime minister
According to the sources in Albania, Amir Parvizi’s attempt to escape the Mujahedin-e Khalq was obstructed by the group’s fraudulent collaboration with Albanian Police. His family from Zanjan, Iran took action to protest 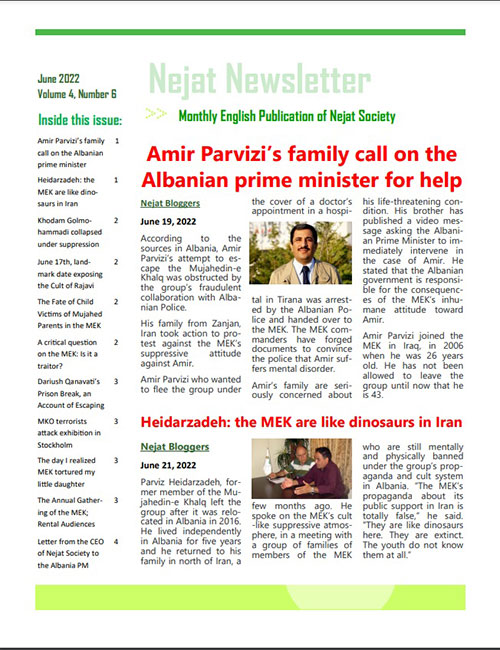 against the MEK’s suppressive attitude against Amir

– Heidarzadeh: the MEK are like dinosaurs in Iran
Parviz Heidarzadeh, former member of the Mujahedin-e Khalq left the group after it was relocated in Albania in 2016. He lived independently in Albania for five years and he returned to his family in north of Iran, a Khodam Golmohammadi collapsed under suppression

– June 17th, landmark date exposing the Cult of Rajavi
June 17th, 2003 is a landmark date in the history of the MEK that exposes it as a cult of personality rather than an opposition group. The arrest of the sheguru of the Cult of Rajavi by the French Police created heartbreaking but at the same time enlightening scenes by which the world was able to observe the true substance of the MEK.

– The Fate of Child Victims of Mujahed Parents in the MEK
Political ideologies can easily influence people’s daily lives. In the contemporary history of Iran, the topic of politics has been constantly remained trending both in the news and in daily conversations of people

– A critical question on the MEK: Is it a traitor?
The short answer is: “Yes, they are” but the explanation is crucial because it will clarify many other facts on the group through its Dariush Qanavati’s Prison Break, an Account of Escaping…
MKO terrorists attack exhibition in Stockholm
Members of anti-Iran terrorist group, Mujahedin-e-Khalq (MEK), have attacked the organizers of an exhibition held in Swedish capital of Stockholm on the group’s crimes. The MEK terrorists…

– The day I realized MEK tortured my little daughter
Esmat Vatanparast called mother Esmat, defected the Mujahedin Khalq after she realized that the group agents tortured her small daughter. Mother Esmat was an active member of the MEK. She lost several members of her family for the group’s cause but once she found out that the group’s leaders are dishonest, she defected.

– The Annual Gathering of the MEK; Rental Audiences
The propaganda meetings of the Mojahedin-e Khalq group, known as the Kahkeshan (Galaxy), were held from 2004 to 2018 in various places in Paris, Auvers-surOise (Maryam Rajavi’s residence), north of Paris, or in the Villepinte.

– Letter from the CEO of Nejat Society to the Albania PM
Following the hacking of Tehran’s municipal systems and disruption of “My Tehran” and surveillance camera networks, the source of which was reported after an investigation to be in Albania, the CEO of the Nejat Society wrote a letter to the Prime Minister of the Albanian government in this regard. The text of the letter (briefly) is as follows: