Operation Forough-e Javidan (meaning Eternal Light)* is an event that left deep and long-term effects in the developments related to the Mojahedin-e Khalq Organization (MeK), not only because it took place after acceptance of the UN security council’s ceasefire resolution by Iran, but due to the very nature of this event.

There are some main indicators in the Operation Forough-e Javidan and its aftermath that turned it into a black spot instead of an “eternal light” in history of the MeK.

First, this group has been a violent militant organization that should not be misunderstood as a political group opposing the ruling government in Iran. Which “opposition group” has conducted a massive military attack against its enemy using more than 7,000 troops and hundreds of tanks and personnel carriers? One should not forget suppression of Iraqi ethnic minorities in 1991 by the MeK in northern Iraq with heavy military equipment. 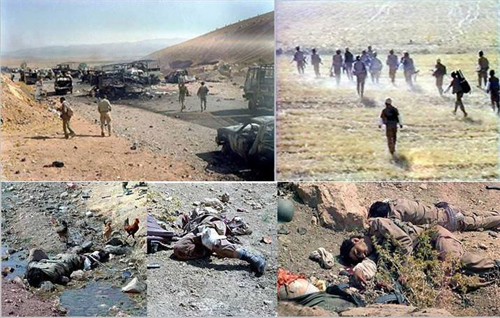 The second point is the MeK’s association with the fascist regime of Saddam Hussein and its notorious security-military establishment. Actually, Forough-e Javidan was not the starting point for the MeK’s cooperation with Saddam Hussein’s regime. During the long war between Iran and Iraq, the group gave telecommunications, intelligence and espionage services to the Iraqi dictator’s regime. However, it was during that operation that Saddam provided the MeK with massive weapons and heavy equipment so that this group turned into “Saddam’s private army”, an alliance that continued until the MeK’s forced disarmament following the fall of Saddam in April 2003.

The next indicator is related to the historical betrayal of this opportunist group to the Iranian people, an issue that has doubled the hatred of Iranian citizens towards them and has even led to tension between the political groups opposing the Islamic Republic and the MeK. The group’s act in moving to Iraq as a country that was engaged in a war with Iran and siding with the invader is an unforgivable betrayal in the eyes of all Iranian people regardless of their political tendencies and apart from their approach to the Islamic Republic. Just think that if there was such a group in a Western country which was sheltering in a hostile country in the time of war and engaged in aiding the enemy, then what would be the reaction of that country towards this group?

The MeK launched a military aggression against Iran based on their leaders’ completely wrong understanding of both the Iranian people and their desires and the MeK’s weight and capability.

There were two issues that Iranians had not forgotten in that period of time, which Rajavi was completely unaware of. The first was the group’s large-scale assassinations of Iranian citizens and officials in the 1980s which created an atmosphere of absolute terror in different cities of Iran, and the second was the hatred of the Iranian people for Saddam, the Iraqi dictator who waged a war with devastating losses against Iran. Now, this group had sided with the aggressor and very naively expected to be welcomed by the Iranians upon arrival in Iran after Operation Forough-e Javidan.

Perhaps, the massacre of citizens and patients in Imam Khomeini Hospital by the military units of the MEK in Operation Forough-e Javidan and burning them alive in the hospital yard was Rajavi’s reaction to this unrealistic expectation and a form of revenge against the people whom he mistakenly thought would support him.

The fourth was the beginning of a new set of restrictions and violations of human rights within the MEK group. After Forough-e Javidan, the changes within the group progressed towards intensification of cult-like behaviors of the MEK’s leader. The failure in Forough-e Javidan made Rajavi think that he should build a higher fence around his group and its members. In no fewer than three months after this humiliating defeat, he ordered all couples to get divorced. All children were separated from their families. Singles were required to be celibate and this rule is still in place! Since then, everyone must be at the service of the leadership and their goals. Out of that violent military organization, a new cult was being formed whose cultic rituals were updated day by day to control the members’ activities and thoughts.

The defeat in Forough-e Javidan led to the creation of severe restrictions by the leadership against members which remain to continue even in their camp in Albania fueling Iranian people’s hatred for them more and more. Having suffered a devastating defeat in 1988 despite having several thousand military forces and benefiting from heavy equipment provided by Iraqi dictator Saddam, after 34 years with decrepit soldiers and broken families, the MEK evokes for Iranian people a bitter memory of betrayal as mercenaries for one of the most bloodthirsty dictators of the 20th century.

Now, the presence of this group in Albania, the Balkans and Europe poses a potential security threat for the residents of these regions. The records of the repressive acts of this cult against Iranian and Iraqi citizens and hundreds of defectors reported in international documents clearly indicate that a militant cult is impossible to change. The MEK are opportunists and are willing to side with any corrupt dictator or politician to achieve their goals. They are a threat to the security of all nations and communities.

*This operation which is the MeK’s largest military action against the Islamic Republic of Iran, was responded massively by the Iranian Army and the Islamic Revolutionary Guard Corps in an operation called Mersad, forcing the MeK fighters to retreat towards the Iraqi border after suffering heavy losses.