– Letter from the CEO of Nejat Society

“For your information, Massoud Rajavi, the cultic leader of the MEK, announced in a message that was read to the members at the camp of this Cult in Durres, that “entry of the families into Albania is crossing our red line and this should never happen”. The question that arises for the families is whether Massoud Rajavi can decide who 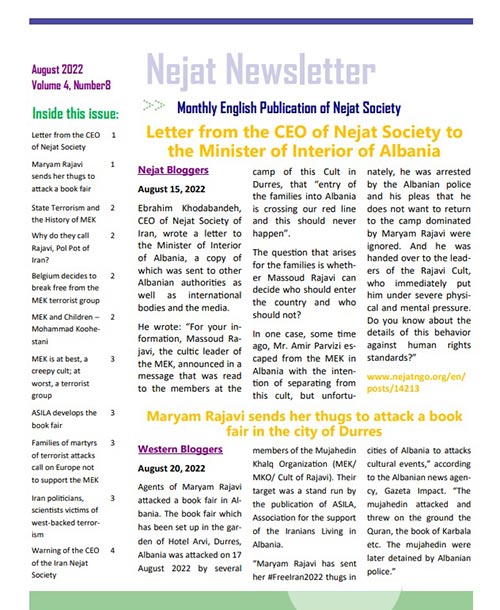 should enter the country and who should not?

– Maryam Rajavi sends her thugs to attack a book fair

August 20, 2022 Agents of Maryam Rajavi attacked a book fair in Albania. The book fair which has been set up in the garden of Hotel Arvi, Durres, Albania was attacked on 17 August 2022 by several..

– State Terrorism and the History of MEK

The specialized meeting of State Terrorism and the Black History of Mujahedin-e Khalq was held by Terror Spring foundation that seeks to introduce the real face of the terrorist group of the group. The video conference was hosted by Alirez Niknam. Dr. Olsi Jazexhi, the Albanian historian and university professor from Malaysia spoke on the topic of state terrorism and supporters of the terrorist group of
the MEK. He discussed the likely links between the MEK and the Israeli intelligence service, Mossad.

– Why do they call Rajavi, Pol Pot of Iran?

About two decades ago when Elizabeth Rubin titled his article on the Mujahedin-e Khalq as “the Cult of Rajavi” and published it in the New York Times Magazine, she quoted the Iranian public opinion at the end of the article with a phrase that was actually

– Belgium decides to break free from the MEK terrorist group

In recent days, the annual meeting of the MEK terrorist group has been canceled for reasons that have been listed as security concerns. In Belgium, with a courageous and humanitarian act, the country’s parliament

Mohammad Koohestani was born in 1982 when his parents had a clandestine life in Iran. His father Mostafa Koohestani had married his mother Zahra Farahnak three years earlier because..

– MEK is at best, a creepy cult; at worst, a terrorist group

The American journalist, Michael Rubin warns about the US strategy to support the Mujahedine Khalq Organization (MEK/ MKO/ Cult of Rajavi). He discusses three Iran strategies taken by the US that are guaranteed to fail. One is supporting the MEK which according to him at best is a creepy cult; at worst, it
is a terrorist group.

The association “Asila” is known as the only one in Albania which mainly
contributes to the support of the Iranian community in Albania. Asila works with a highly qualified staff
following all the legal steps to be as correct as possible with the regulation of the statute based on each legislative protocol.

Some members of families of martyrs of terrorist attacks in Iran called Monday on Europe to stop supporting the terrorist group of Mujahedin-e-Khalq Organization (MKO) that has assassinated 17,000 Iranians.

In the past four decades, Iran has been the biggest victim of terrorism in the world regarding the number of Iranian politicians and scientists who have fallen victim to the terrorism sponsored by the West and Zionists.

– Warning of the CEO of the Iran Nejat Society

Following the recent events in Albania and especially the fabrication of lies in some of the country’s media against the ASILA, the CEO of the Iran Nejat Society wrote a letter to the American ambassador in
Tirana on behalf of the concerned families and warned about the terrorist conspiracy of the MEK in Albania against former members in this ..
To view the pdf file click here