As discussed, the initiated change within MKO following the internal ideological revolution in 1985 aimed mainly on securing Rajavi’s permanent leadership and transforming the members into his absolute devotees and, in general, crystallizing the whole organization into a cult of personality. Of course, it was not so easy a task to compel members to surrender to the Rajavi’s selfish ambitious on their own will and to dissolve in a leader whom many believed to be inadequate to assume the status.

Since MKO is heavily built on a hierarchical structure, the members are controlled and organized under the command of higher ranks who in turn receive orders from higher command echelon. It made it much easier for the 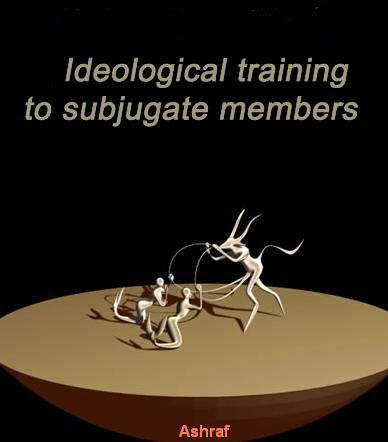 organization to impose the change on the members through such a forced stratum either through persuasion or designed processes of penalization. As the members would be provoked by persuasive heroic deeds of the responsible ranks, the statements of submission had to be first made by them.

In this way, the rational thinking power of the rank and file would be paralyzed under the impact of the impressive expressions of emotional parodies. Consequently, in a systematic fashion of letter writing, they began to write open letters of congratulation to the newly wed Rajavis, and Massoud Rajavi himself in particular, for the heroic move and the initiated new phase in MKO.

A look at the countless volume of these letters, known as the letters of ideological revolution, with identical themes of expressing total devotion to the leadership and his novel ideological revolution well indicates the organization’s resort to crafts to subjugate its own insiders regardless of its hypocritical wearing in the political scene. Let’s go through a number of these letters all published in the organization’s official gazette Mojahed soon after the unconventional marriage of Massoud Rajavi and Maryam Azodanloo. Writing of her unconditional dedication to ideological revolution, Mina Khyabani, Mahdi Abrishamchi’s second wife and sister of Musa Khyabani, in her letter addressed to Rajavi stated:

I hope to be close behind you now attaching to your emancipating revolution with my soul. To be liable to follow the path, I need to be cleaned of whatever evil and element of filth. I bow to you to the extreme of my comprehension of your high status, and appreciate your miraculous move of self-sacrifice, that is far above the martyrdom of many thousands, that has guaranteed a history. Now I believe to be all blameworthy before this revolution. I hope this revolution will act as a motivation to reinforce iota of values within me to make me capable of being under your command as once I was. *

Mohammad Seyyedi Kashani is one of the oldest, experienced veterans whose organizational activities even exceed that of Rajavi. He, too, addressing Rajavi has stated:

Dear Massoud, Iwill call you brother no more. You are my sage. Dear to my heart. You are my teacher…. many things have undergone a change in the organization and the world within us. I am sure that the last rusted layers of the old world would be eliminated from within the forces and sympathizers. Obviously, in our most favourite organization the real Mojahed is the one who is more unselfish and capable and also most cherished before God.

In another letter from Mohammad Hayati, another member of MKO, we read:

I congratulate the blessed marriage of my ideological leader Massoud and Maryam. Definitely and knowingly I recant for failing to understand the grandeur of this leadership.

In the letter of Hussein Abrishamchi, Mahdi Abrishamchi’s junior brother and a commander in chief of the organization, addressed to the Rajavis it is stated:

I wish I could kneel before you [Maryam] and Massoud as the forerunners of this great revolution and take my oath of allegiance.

Mohsen Rezai a member of central cadre in his testament of allegiance to Rajavi earnestly supplicated salvation from him:

Great men have marvellous power of draw and repulsion. Now I see it in you and you can influence all. Anybody endowed with an iota of humanism and nobility falls in your love and you repel whoever walks in the wrong path. I am sure that you will be among those closest to God in the Day of Judgment and I am also sure that you will take my hand for my salvation.

Mahdi Abrishamchi, playing his own influential role in the ideological revolution, was one of the most enthusiastic espouses of the move started by his ex-wife and Rajavi:

This ideological move shed light on all of us. We were purged of our filth and dirt by passing through the kiln Rajavi indicated. Now our ideology is shining and we are not the ones we were in the past. We have the honour of surpassing all those that ceased to follow the path. Now I dare say, after this revolution, that we are true members of Mojahedin, aren’t we? We pride ourselves on being his [Rajavi] followers and disciples; he is our instructor who has trained us and we hope he will do in future, and he will. We praise God for leading us to the right path through Massoud and Maryam, otherwise we would have gone astray.

As seen, in all these letters the ranking members insist to state that the crystallized ideological revolution has led to great changes within them and the structure of the organization as well. According to many assertions made by Rajavi, Mojahedin are engaged in a never-lasting change until all intended objectives of leadership have been accomplished. 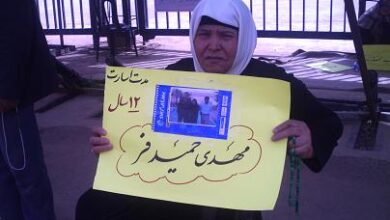