Almost all MKO former members unanimously report that the organization leaders are opposed to further extra organizational studies. They reason that members have to give priority to practical considerations rather than 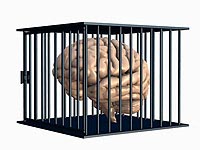 theoretical ones. Absolute pragmatism constitutes one of the main parts of controlling system in MKO. It bans any kind of study aiming at improving theoretical political knowledge. Before reviewing the statements made by Mojahedin ex-members concerning such an approach, it is tried to evaluate it with regard to the new executed value system within MKO after the development of the ideological revolution. The reason why Rajavi, MKO leader, prevents members of obtaining theoretical knowledge has its roots in his worldview and ideological objectives.

Absolute submission to leadership is considered to be one of the inseparable aspects of all political cults and that of MKO. Mojahedin’s theoreticians have focused on such a feature and calling Rajavi the man of ideology within MKO, point to blind obedience of members as their sole way of salvation. According to Mojahedin leaders, organizational improvement is achieved through absolute submission rather than obtaining political and theoretical knowledge. Taking a brief look at the statements of some MKO former members may prove this claim. It is said that before the initiation of the ideological revolution in MKO, members were qualified according to the following factors:

In other words practical as well as theoretical competencies were taken into considerations simultaneously as practiced in all political groups and organizations. However, after the start of the ideological revolution, parallel to the change of the value system within MKO, all such criteria change and were replaced with just one criterion, namely blind obedience to leadership. Rajavi asked the members not to speak but act according to what they were ordered to do with no questioning. In fact they needed no further study since they needed no knowledge and understanding. Anne Singleton, an MKO ex-member, refers to this aspect of the ideological revolution and says:

He pushed the members to work harder and not to ask questions. He changed the ethos of the organisation by passing messages down to the membership of what he expected of them. The major theme of the time was that ‘ideology is what you do, not what you say’. In other words, don’t speak, act. (2)

She further compares and contrasts the organization attitude toward members before and after the ideological revolution as follows:

The major change too was in what was meant by ideological competence. In the original Mojahedin organisation this meant someone who had political, social and moral knowledge and experience. Someone who had undergone ideological instruction as had the first members way back in the 1960s. Since the Ideological Revolution, however, it came to mean someone who is, more than others, unquestioningly obedient to Rajavi, with no ability or desire to think for themselves, who will suppress any previous knowledge or experience they had in order to parrot what Rajavi requires of them. (3)

Another former member quotes Rajavi putting forth the new criterion for organizational advancement:

Rajavi told us: ‘You are not capable enough for political discussions and analysis and may go astray. You’d better let me do it, there is no need for you to pursue political events and analyze them, I will do it for you and tell you the results. If not, you may be disappointed since you have no political knowledge. There is no need to be anxious and pour out your heart to others; it is out of your business to know whether the ways are open or not. (4)

In order to develop a deeper understanding of this controlling process in MKO it has to be noted that one of the inherent aspects of all absolutist ideological trends is that they classify outsiders as either friends or enemies. Such a viewpoint has many consequences one of which is their focus on absolute submission of members. According to one of the theoreticians of Mojahedin:

One of the features of groups with ideological absolutism is that in establishing relation with outsiders close to them, they recognize no independence. In other words, the system’s rules necessitate it to have just two options regarding political outsiders, either absolute agreement or absolute opposition. (5)

It is not possible to understand how organizational limitations and prohibitions result in controlling members unless the value system of the organization is understood since the structure of mojahedin ideological revolution is very complex and intermingled and there is a kind of cause and effect relationship between its strategies and procedures. Therefore, a deep knowledge about the ideological revolution and its consequences is needed in order to evaluate the course of events within MKO.

1. Niyabati, Bijan, A different look at the ideological revolution within MKO.

5. Niyabati, Bijan, A different look at the ideological revolution within MKO.