Ideology constitutes one of the main levers at the hands of Mojahedin leadership for the fulfillment of his political and cultic objectives. It has played a crucial role in the development of the organization up to now and has served a variety of historical, social, and political purposes. It is a good idea to take a 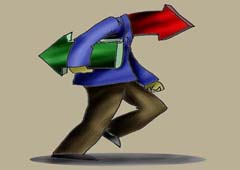 look at the early years of MKO to have a better understanding of the function of ideology. From the beginning, science, ideology, and religion were the main pillars on which Mojahedin founded its political struggle:

In the same way as today’s revolutionary concepts that are the product of bloody struggles of men to change the world’s order, the Divine Revelation through the Holy Qur’an disclosed to man truths that unraveled the secrets of his life and solved the most complex philosophy of existence. 1

Mojahedin from the very beginning have put emphasis on having adopted a religious ideology; however, it was mainly due to the specific social, political and religious conditions of their society not their firm belief in religious values. In fact, the early Mojahedin were very anxious to create an ideology that justifiably approved armed struggle. This claim can be proved easily by means of the analyses made and published by the organization itself. The reason may be the occurrence of the ideological schism of the organization into Islamic and Marxist wings due to the fact that some members came to believe that religion in itself was not capable to solve all social and political challenges of the society. Therefore, it was deemed necessary to replace the Islamic ideology of the organization with an eclectic one.

It has to be pointed out that the ideology of the organization in any phase depended much on the main objectives it pursued and functioned as a pretext for the fulfillment of those objectives. We are not here to make a definitive judgment on whether the founders of the organization have misused ideology or not since religion has been treated in a variety of ways by Mojahedin in the last decades. On the one hand, they looked at it instrumentally with regard to political and social conditions of the society; on the other hand, some others have extracted the necessity of struggle from religious doctrines. However, religion has been considered mainly as a means to achieve political goals.

Many MKO former members have acknowledged that from the early years of the formation of MKO, religion has been considered to be a must but merely with regard to political and social issues of the society. They have asserted that Islamic ideology was adopted at that time since it was supposed that Islam was closely related to class struggle and Marxist ideology. In addition, since Iranian culture was intermingled with Islamic values, Mojahedin made an attempt to blend Islam with their own favorite ideology, Marxism. One of the members witnessing the ideological schism of Mojahedin refers to various interpretations made of religion and ideology and says:

At that time, religious concerns were necessarily in force. In other words, Mojahedin tried to confirm the fundamental concepts of their ideology by means of religion that was intermingled with [Iranian] culture. Therefore, they had to be cautious about whatever could be regarded as anti-religion and reason their words according to Quran. For example, if members theorized that working was of great value, they had to provide evidence from Quran. There were some Marxist books, e.g. Lenin and Mao, as well as other books materially discussing formation of the world among the pamphlets of the organization but Mojahedin leaders were cautious not to target members’ Islamic beliefs and therefore, novel and deliberate interpretation of Quranic verses were presented. 2

This was the starting point for turning religion into an ideology ignoring the real conditions of the society and which aimed at fulfillment of social and political values and norms of Mojahedin. Taking this viewpoint, religion turned to be an instrument at the hands of Marxist Mojahedin. It took at least one decade to turn an idealist political organization into a religious and political cult. Mojahedin justifiably argued that religion by itself and shared in an eclectic ideology has to be at the service of a struggle to constitute a classless society. The world view continued up to Rajavi’s absolute domination over the organization, but underwent a great change especially after the collapse of the Socialism camp that led to a global power imbalance.

No doubt, the process enforced changes that placed the organization in the abyss of a paradoxical ideology. Unlike the earlier days when ideology played a crucial role in class struggle, now it is abused as an instrument to advance certain non-collective interests and to secure authoritarian hegemony of Rajavi. A brief look at the course of events after the development of ideological revolution within MKO well clarifies the raveled facts. Rajavi in all these years misused ideology as well as science and religion in order to justify his egocentrically made decisions that led to strategic defeats and failures.

The ideological marriage of Rajavi and Maryam Azodanlu may be considered to be another turning point in the history of the organization that led it onto the abyss of a cult. Rajavi made numerous justifications for this event with a focus on religious values. It seems that Rajavi tried to misuse all religious creeds in order to safeguard  his selfish objectives. He even compared Maryam Azodanlu to Virgin Mary and her sufferings, stating:

In defense of Maryam, the most pure and virtues Mojahed woman against all accusations and insults leveled against her, I have to say that a whirlwind blows first over the highlands and crushes the flowers atop the branches, that is to say, Maryam, the symbol of freedom of Iranian women. She is a thunderbolt against aggression, a loud roar against oppression, pure and innocent, manifestation of the angel of freedom, the heroine of all Mojahedin victories, beyond any epic and the song of freedom. 3

Rajavi exploited religion and the ideology that was intended to help advance a struggle for a certain cause for the establishment of a most anti-social modern phenomenon, a cult. He accredited himself a god-like and prophetic status whose mission was, and still is, to guide not only his followers but the world. The mere claim of being a cult’s maharishi with a developed eclectic ideology is enough to jeopardize the security and well-being of any society. The problem is even greater with MKO and the Rajavis at the lead; they have developed traits and characteristics of a notorious terrorist organization synthesized with that of a dangerous cult.

3. Rajavi’s lecture on the ideological revolution, Mojahed, No. 253