Shame on western supporters of Mojahedin Khalq Organization (aka: MKO, MEK, Rajavi cult)
on the 30th anniversary of Iranian Revolution 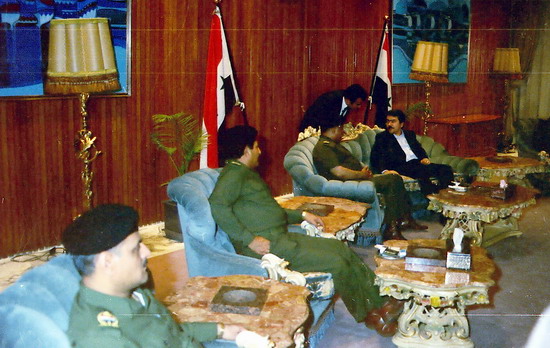 Massoud Rajavi (centre) and Saddam’s Head of Intelligence in terror deals.
on July 03, 2005 Iran Interlink wrote:
Some of the platforms taken by Mojahedin Khalq Organization, led by Maryam and Massoud Rajavi, in the last quarter of a century.
Mojahedin Khalq under the name of National Council of Resistance are trying to politicize their court cases in Paris (terrorism related charges) by portraying themselves on the same side as Israeli hardliners and US neoconservatives.
From their own papers, in their own words, the following is a sample of their involvement in the American embassy siege in Tehran as well as their views about Americans and how they should be treated. The Mojahedin was the main force in capturing Americans as well as publishing anti-American and anti-Israeli propaganda in Iran in a specific effort to block any negotiation for the release of the American hostages.
The Mojahedin was the main force behind execution of officials of the Shah’s regime and tried their best to have the American hostages executed (like the 3 Americans they killed in cold blood during a terrorist operation in Tehran) but failed to do so.

Some questions unanswered regarding the US military invasion of Iran (pdf).
(Mojahedin English Language paper June 1980)