Iran has been the first and main supporter of the Iraqi government after the downfall of Saddam Hussein’s regime, Iraqi Deputy Foreign Minister Labid Abawi 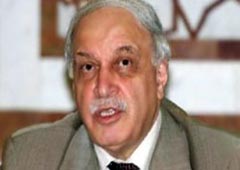 "We have excellent relations with Iran and Iran has always supported us ever since the downfall of Saddam and the two sides have signed dozens of Memoranda of Understanding," Abawi told FNA.

He further noted the increase in the visits to Iran by Iraqi officials, and reiterated, "Our trip with Mr. Jalal Talabani to Tehran was aimed at deepening of relations with our neighbor Iran and took place at the invitation of Iranian President Dr. Mahmoud Ahmadinejad."

On the issue of the security pact between Iraq and the US and the US president’s statements on the withdrawal of the countries’ troops from Iraq, Abawi said, "We are in full harmony with Iran and our position is completely transparent (on this issue). During this trip, we didn’t speak about the (Iraq-US) agreement."

Asked about the Iranian diplomats who have been arrested by the US forces in Iraq, he said Iraq has pressured Americans to release the Iranian diplomats as soon as possible, adding that the International Committee of the Red Cross (ICRC) has informed Iraqi officials that two of the Iranian inmates will be freed in the near future.

Elsewhere, he pointed out that the anti-Iran terrorist group, the Mojahedin-e Khalq Organization (MKO), will be expelled from Iraq and that his country is searching for a third country to host the group members.

Labawi expressed pleasure in his visit to Iran, and described his meetings with Iranian officials as fruitful, stressing that Iraq wants to further strengthen ties with Iran.