Iraq has reached an agreement with the United Nations and the European Union to move the remaining members of the Iranian Mojahedin-e Khalq (MEK) to the Romanian territories as soon as possible.

The Iraqi Government had discussed with the European Union Ambassadors, the agreement between Iraq and the UN to move the remaining MEK members in Liberty camp (located near the capital Baghdad) to a third country, as it became impossible for the MEK to remain in Iraq after having information regarding their involvement in cooperating with Saddam Hussain in oppression of 1991 revolution in Iraq.

MP from the State of Law, Foud al-Duraki said in a statement to PUKmedia that the third country had been agreed on by Iraq, UN and EU which shall be Romania. “the Iraqi Government do not want MEK members to stay in Iraq, as they participated in oppression of 1991 revolution in Iraq with the former regime” al-Duraki added.

3164 members of the MEK, had been transported to Huriya camp under the supervision of UNAMI to be moved to a third country (Romania).

Reported by Nazik Muhammad from Baghdad,PUKmedia 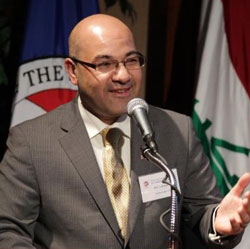