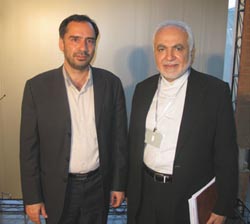 Mr. Abdol Rauf who is a prominent Islamic leader in the West is also an Associate Professor of Islamic Studies at St. Joseph’s College’s Brooklyn Campus in Brooklyn, New York and founder of the Cordoba Initiative which aims to connect the Muslim world with the West. He has also founded American Society for Muslim advancement.

In this meeting and along with enumerating MKO crimes in both Iran and Iraq, Seyyed Mohammad Javad Hshemi Nejad asked Abdol Rauf:”How is it that 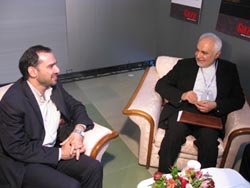 America hails change and establishing relationships with Iran while takes advantage of terrorist groups in order to cause insecurity and instability inside Iran? Isn’t it America’s double standard to designate a group as terrorist and support it at the same time?

Secretary General of Habilian Association referred to the last year report by distinguished American journalist and news writer Seymour Hersh which unveiled that the U.S Congress had agreed to a request from President Bush to fund a major escalation of covert operations against Iran for which the President sought up to four hundred million dollars in order to covertly destabilize the Islamic Republic in Iran via applying terrorist groups like MKO, Jundollah and P.K.K and said: after the downfall of Saddam, it was supposed that terrorist groups be uprooted from Iraq;

but not only it didn’t happen but also America changed into major support fro terrorists in Iraq making obstacles on the way of their expulsion from Iraq.

In this meeting Feisal Abdol Rauf condemned, in his turn, terrorism in all shapes and demanded the expulsion of all terrorist groups from Iraq. He also hoped that he could enlighten American politicians and make those who have been deceived by terrorist groups not to support them anymore.