One of the main priorities of MKO has been finding a new strategic spot after the fall of Saddam and being disarmed by the US forces. The reason why Rajavi moved to Iraq was the strategic closeness to Iranian soil that extended thousands kilometers of borders with it which facilitated an easy infiltration to launch across the border terrorist activities. The political conflict of Saddam with Iranian government as well as this strategic position led him to ally with Masoud Rajavi to exploit his so-called National Liberation Army (NLA). He also employed MKO members as infiltrators and spies to the point that Saddam and Rajavi soon recognized signs of ideological and blood kinship. However, the fall of Saddam disappointed all hopes of Rajavi and left him in a desperate attempt to look for a new place to settle his forces in a bid to accomplish his long failed objective of overthrowing the Iranian regime.

Nevertheless, the attempts of Rajavi in recent years have been futile failing in transferring MKO members from Iraq that is no more a safe haven for those who were once engaged in committing terrorist actions against Iraqi people on their own soil. The hostile position taken by Rajavi in Iraq despite his illegal settlement therein has been a warning for other countries not to let him and his organization in. Rajavi is well aware that at the time being no country consents to give refugee to Mojahedin due to their notorious terrorist nature and past history. However, he is looking to find an alternative Camp Ashraf with the same geographical merits. Turkey is a perfect options yet it is no more on the agenda of Mojahedin due to tens of political reasons. Furthermore, Pakistan and Afghanistan would never let Mojahedin enter their soil. On the other hand, Mojahedin have to leave Iraq and Masoud Rajavi must find another location for its organization and undergo a fundamental change in his policy based on the use of NLA. In the present conditions, Rajavi has to ignore the factor of geographical privilege and focuses more on finding a fixed abode wherever possible.

France may be an alternative for Mojahedin. The significance of France for Rajavi is twofold: First, a great number of MKO high rankings are refugees in France and can return there if necessary. It makes the organization pay due costs for transferring all its members to Auver-sur-Oise. Second, Auver-sur-Oise was the first residence of Mojahedin after their expulsion from Iran and now has adequate facilities to accommodate the remnant of MKO members. But it is what MKO wishes and hopes for while other factors and levers seem necessary. Will France ever risk letting a globally recognized terrorist group in? France in recent years has proved to be disinterested in MKO policies and it is highly probable that it would refrain to brook its transfer to its soil. However, Mojahedin have some levers at hand that may pave the way for their transfer to the West and France in particular. It is almost three decades that Mojahedin have misused the discords and conflicts of the western parties and leftists in particular to win the support of westerners. They have managed to expose themselves to the European countries by means of pro-democratic slogans of some leftists under the banner of supporting human rights.

The significance of Auver-sur-Oise for Rajavi lies in the fact that establishing another Camp Ashraf is almost impossible but in Auver. To this end, MKO is extending its territory therein by buying the houses next to the residence of Maryam Rajavi. It indicates that MKO is hopeful to transfer to Auver. This is a warning given in advance by many experts:
The People’s Mojahedin of Iran has hardly any choice but to begin moving their activities to Europe. To do this, they can count on active support from a certain “Progressive International” which has hoped for years to weaken the West. This ultra-Left has no roots in the traditional political currents of thought, even using the idea of “democracy” as bait to lead the unsuspecting into the maze of a kind of instinctive socialism.1
Mojahedin have other levers for paving the way for their transfer to Auver. According to an expert on terrorism:

The leaders of the PMOI have decreed what they call ‘a phase of patience’ and ‘judicial mobilisation’. This is to add the help of lawyers in assisting the PMOI members obtaining political refugee status so that they can enter Europe legally.

By small groups of five or six, they move into host countries under the cover of charitable organisations. The PMOI is reorganizing to turn itself into a machine for political combat. It would like to appear to have given up armed struggle, but it is truly incapable of thinking in any other way. For now, they want people to forget the shadow of Saddam Hussein”. 2
In a nutshell, Mojahedin can impose themselves on European countries and France in particular by means of some levers and factors. Fabricating a legal legitimacy for a terrorist group is a warning for the West that is carried out by a number of western left parties in a hostile reaction to the policy of their governments. The entrance of a terrorist group’s members to Europe not only spoils the continent’s prestige among the international community as following a double policy in combat against terrorism, but also exposes the host government to irreversible damages in its internal and external relations, not speaking of the costs that a full control over the activities of the organization will impose.

The outset of Rajavi’s longtime treason 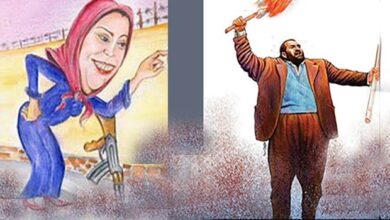