Iraqi National Security Adviser Dr. Muwaffaq al Rubaie denied that there were any plans to 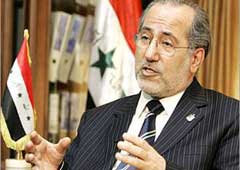 transfer members of the Iranian opposition movement Mujahideen-e-Khalq based in Camp Ashraf, northeast of Baghdad, to Pakistan.

“The US forces considered the idea when they were responsible for the security situation in Iraq since the US administration wanted to put them in confrontation with Iran there. But now the Iraqi government is responsible for their conditions and for Camp Ashraf,” Rubaie told Asharq Al-Awsat by telephone from Baghdad.

Al Rubaie stressed that “Iraq is committed to international conventions and to the American administration that it will preserve the security and wellbeing of those present in Camp Ashraf. We will not force them to leave Iraq.” He added, “It is their right to choose whether to return to Iran – on the condition that Iran promises not to punish them – or to go to a third country.”

A leading figure from the Mujahideen-e-Khalq movement spoke to Asharq Al-Awsat on the condition of anonymity and said that this information is “unfounded.” He said, “This is merely leaked news, the aim of which is to discredit the historical decision of Mujahideen-e-Khalq that it was willing to return to the country [Iran] on the condition that fundamental rights could be guaranteed by international parties.”

US Secretary of State Hillary Clinton said Wednesday, “Although the US government remains engaged and concerned about this issue, it is a matter now for the government of Iraq to resolve in accordance with its laws.”

She stressed that the Iraqi government must uphold commitments to protect those living in Camp Ashraf and not hand them over to “any country where such a transfer might result in the mistreatment or the death of that person based on their political affiliation and activities.”
Baghdad: Rahma al Salim, Washington: Mina al Oraibi