Alireza Ahmad Khah, a resident of Camp Ashraf was killed.

Immediately after the publication of the news of MKO residents’ clashes with Iraqi forces, families who are members of Nejat Office in Gilan including Ahmad Khalh family came over. They welcomed the act of Iraqi government to take complete control of Camp Ashraf, appealing the Iraqi government and all Human Right bodies for the release of captured residents of Ashraf from the bars of Rajavis’ cult.

They are also looking forward for the fate of their beloved ones who might face a bright future, by visiting their families far from the deadly atmosphere of Camp Ashraf.

Ali Reza Ahmad Khah was among those Ashraf residents who were killed in clashes which were intensified due to MKO leaders’ stimulations. His family was seriously concerned about his health. They regularly came to Nejat Society office to get news of health of their beloved son.

He was another victim of Rajavi’s ambitions.

It is worth to know that MKO itself anticipated contacting Ahmad khalh family to inform them of the death of their son! Of course not for informing them but for abusing his blood to make a new show off in front of world witnesses but Ahmad Khah family who suffered years of being uninformed of their beloved son, insulted the caller that “ why you never called us to give the news of his health in all those past twenty years?!”

Now we see you as responsible for the death of our beloved one. You must be tried before all international courts.

The following is Ahmad Khah family’s appeal for justice: 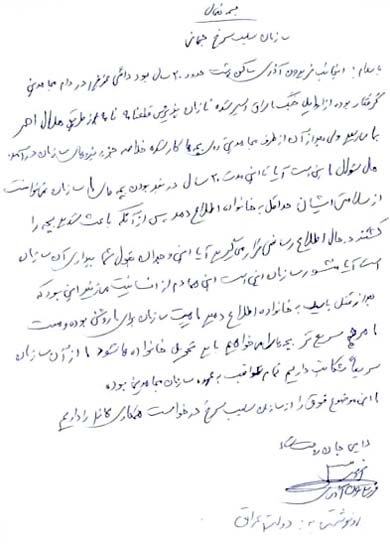