Family of Mehraban Babayee asked for his return

Balayee family have been an active Nejat member since two years ago, at Nejat Society Gilan Branch, where they were able to send letters to their brothers Mehraban and Kiyomars who have been captured in MKO’s Camp Ashraf for twenty – four years. However the leaders of MKO neither allowed them to reply the letters, nor let them make a phone call to their families.

In recent clashes between the MKO and Iraqi forces that were started by leaders of the cult and ended with the death and injury of a number of forces on both sides, Mr. Mehraban Balayee was also injured and then he received treatments by Iraqi forces.

As usual the organization published the news of his injury by his so called National Council of Resistance and ridiculously claimed that Mehraban was wounded on his arm and leg and he passed out due to bleeding, surprisingly, he passed 14 days on hunger strike so as his colleagues asked him to stop it in order that he can return to Camp Ashraf!

Balayee family came to Nejat Society office as soon as they were informed of the fearful news of their beloved brother’s injury. They wanted to get further information about his current condition. When they saw the news published on NCR website, they wondered how could an injured person on both arm and leg, unconscious of bleeding go on hunger strike?

Therefore, Balayees informed of Rajavi’s tricks to achieve his ambitions, wrote a letter to Nejat Society central office, asking for more help to be able to return their injured brother to his worried family.
The following is the original version of Mr. Shadman and Mr. Ali Balayee: 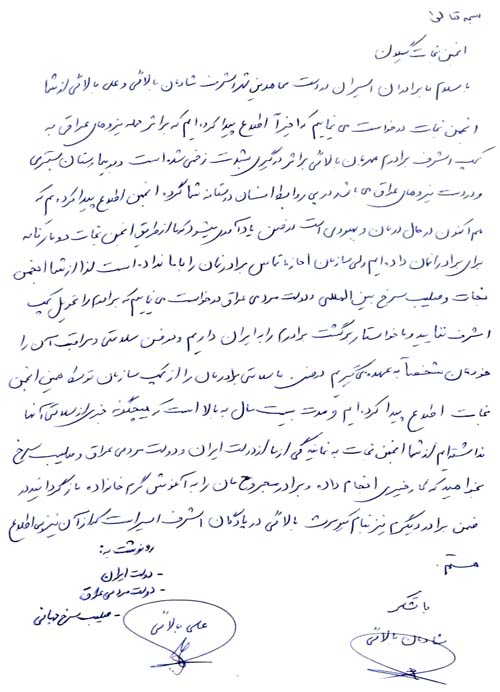