Secretary General of Habilian Association said: It’s been more than six years ago that Americans entered Iraq, but the people have not yet been able to see the peace in this country because of lack of security due to the presence of Americans and terrorists in this country.

According to the database of Habilian Association (terror victims family) in a meeting with a group of over 30 tribal leaders, doctors and teachers from the eastern Iraqi province of Diyali Seyyed Mohammad Javad Hashemi Nezhad also stated: Americans invaded Iraq on the pretext of bringing democracy to this country but after such a long time of over six years of their presence in Iraq, Iraqi people still have not seen peace and security 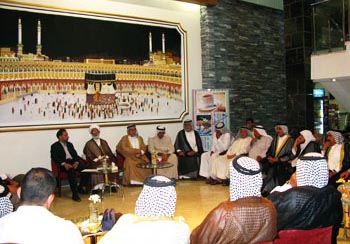 Over a million deaths outcome of America’s presence in Iraq

He expressed that: After the occupation of Iraq, Americans called themselves the security trustee in this country, but this presence has so far resulted in the killing of more than one million Iraqis. Now the question is that aren’t Americans really able to establish security in Iraq?

He also added: "Obviously a country like America that has a high capability could well react against terrorist threats in Iraq and return security to this country but the American officials preferred to link all the problems in Iraq to Iran, but the Iraqi people and government never accepted such a lie.

Hashemi Nezhad continued: Americans are well aware of the mass entrance and presence of terrorists in Iraq, but they need the existence of such terrorists to establish unrest and instability in Iraq and therefore justify their presence in this country and also to accuse Iran for the problems in Iraq.

Secretary General of Habilian Association went on and said: Supporting terrorists would have benefits for America. He said: The fact that MKO terrorists have so far killed over 12000 innocent people in Iran is undoubtedly of no importance for Americans or even the crimes Al Qaeda has committed will not make them stop supporting terrorists; the only thing which matters to them is supporting terrorist groups such as MKO and Al Qaeda. Such a support for terrorism would be of their first priorities in making the region insecure and to continue their presence in Iraq.

Hashemi Nezhad evaluated a good future for Iraq and clarified: certainly the Iraqi people will build a clear future for this country and we hope Iraqi people could reconstruct and develop their country using their own forces. We also hope that as the MKO headquarter of camp Ashraf is being closed in Iraq, this issue be followed up to the end and make happy the people of Iran and Iraq which had received numerous damages from this terrorist cult.

The most deserving action is to follow the way of martyrs

Another speaker to the meeting was Ayatollah Sistani’s representative who expressed his pleasure from being in Iran and praised martyr Hashemi Nezhad’s son and said: I’m so happy to see you’re following your father’s way and I hope other martyrs’ children continue the way of their fathers too. I think this would be the most deserving act.

Ayatollah Hani al- Tamimi added: "Resorting to Islam is the only way we could stand against colonialism and imperialism. We should be aware that colonialism always appears with a mask and uses the weapons of hypocrisy.

He said: We have received several damages from MKO terrorist cult too and our people have suffered a lot from their parasitic presence in Iraq.

He called Iranians a great nation and continued: Your country is the Islam’ land while the Iraqi people have also learned to resist the enemies and to achieve their causes with resistance.

MKO must be expelled from Iraq

Ayatollah al-Tamimi said: I have been living in Diyali province since 1970s and I know how the Islamic traditions are observed in this province.
He pointed to the representatives of Diyali who attended the meeting and said: The representatives of Diyali have repeatedly asked the Iraqi government to expel MKO from Iraq. We also staged a big rally in protest to MKO presence in Iraq.

Representative of Ayatollah Sistani then notified: We recently held a big celebration in the city of Khalis in which scholars and elders of this city demanded MKO to be expelled from Iraq.

Then he referred to the imperialism plots for interference in the internal affairs of the countries and creation of disunion and dissension and added: We must stand against our common enemies through unity and under the instructions of our religious scholars.

Sheikh Ghays Hassan Abd al-Amir was another speaker of the meeting. He said: In Diyali terrorists were on to stand against God but the people of Diyali stood against them and demanded their expulsion from Iraq.

He continued: We are happy to see the Iraqi government has granted our desire and that the Iraqi security forces have taken control over camp Ashraf.
At the end of the meeting Secretary General of Habilian association expressed once again his happiness from hosting the Iraqi delegation in the holy city of Mashahd and said:

MKO which has a long history of atrocities and crimes in both Iran and Iraq are now tying to fight against the domination of Iraqi army over Camp Ashraf by propagating as if they are being oppressed. This is while they have killed a number of Iraqi forces and have wounded some others during the recent takeover of the camp by Iraqi forces