Lord Maginnis of Drumglass (Crossbench)
To ask Her Majesty’s Government further to the Written Answer by Baroness Kinnock of Holyhead on 16 December 2009 (WA 246), whether their position on alleged injustices against residents at Camp Ashraf by the Iraqi authorities takes account of their representations to the Government of China in the case of Akmal Shaikh

Lord Brett (Government Whip (technically a Lord in Waiting, HM Household); Labour)
The UK opposes the death penalty and takes action in all cases to try to prevent UK nationals being executed. Akmal Shaikh was the first EU/British national to be executed in China in 50 years. Twenty-seven high level representations were made to the Chinese authorities dating back to November 2008 by my right honourable friends the Prime Minister, the Foreign Secretary and other Ministers. The basis for these representations mainly centred on Mr Shaikh’s mental health. Mr Shaikh’s mental health was a crucial aspect of evidence that the Government believed the courts should have considered before they delivered the sentence.

Camp Ashraf is part of a sovereign and democratic Iraq and the situation there is a matter for the Government of Iraq. We regularly discuss Camp Ashraf with the Iraqi Government, including with the Iraqi Prime Minister and Ministers for Human Rights, Internal Affairs and Foreign Affairs. We continue to underline the need for the Iraqi authorities to deal with the residents of Camp Ashraf in a way that meets international standards.
There is no link between the two issues. 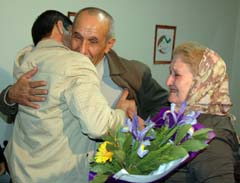 From U.S. Silent on Raids against PJAK to aggressive lobbying for MKO

U.S. AGENDAS IN IRAN MAY PRESENT A PUBLIC DIPLOMACY QUAGMIRE