With our best greetings and hails to your Excellency, The Prime Minister – Elect of Iraq,

The settlement of Iraqi forces in presented garrison called Ashraf, New Iraq, was the first step which was taken to help stranded captives in the cult’s clutches and of course , the leaders and operatives of this felon and criminal cult have lost their ability to implement suppression and 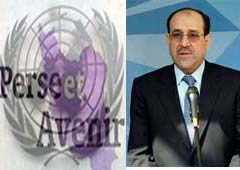 inquisition of thoughts and beliefs against their own members behind closed gates of this notorious and abominable garrison like before during Saddam Hussein’s reign, because now , they are deprived of support of cussed and unblessed Saddam Hussein, but this first step which has been positive and very helpful for the captives , is not enough and it should be other steps taken to expedite and accelerate the freedom of these captives from the cult’s clutches and according to our own experiences which is the outcome of over two decades captivity in this garrison, New Iraq, former Ashraf, the next step should be begetting and making camp or camps which are run and controlled under direct supervision UNHCR and ICRC and Iraqi government and in these camps which the rank and file of this notorious cult are completely separated from the cult’s leaders and operatives so they can freely and without any pressure and religious – political indoctrinations from the cult’s leaders decide and make up their minds about their own future and finally after spending and wasting many years in this garrison and away from any religious indoctrinations and brain washing , they specify their future life – path and rescue themselves from the putrid swamp and lagoon of this felon cult then they can sip the taste of freedom , family , and real life which Rajavi,the traitor , had deprived them of all those things for decades .

The wave of opposition and unwillingness with violent and brutal ideology and politics of this cult have been increased and escalated among the rank and file and writing slogans and distribution of leaflets and pamphlet by the dissidents inside the garrison has started but establishing and making new camps with serenity and tranquility and away from cultic relations and the cult’s leaders , will expedite the freedom of the cult’s captives. The camps which the family and loved ones of the cult’s captives can visit and meet them without any confinement and limitation and a way from the cult’s leaders and operatives’ supervision in particular.

MR. Prime Minister , it is necessary to remind your Excellency that according to decades of captivity of those victims and stranded people in this garrison and the rest and the lack of communication with the free world and in our expression ,life in cave, there is fear and disappointment among the residents of this garrison which if they decide to separate and defect the cult , where should they go ? and what should they do outside?, which the existence of the mentioned camps and their freehand in those camps and having access to internet , satellite ,television to communicate with the modern and free world and getting in touch with their family and loved ones via phone or meeting face to face with them , will help and assist all those victims and captives to find themselves and decide for their own future.

The Ancient Iran Association , urge your Excellency ,The Honorable Prime Minister -Elect of Iraq , not to allow the cult’s leaders and operatives to beget and create humane catastrophe through brain washing and religious and political indoctrinations of those victims and captives who are stranded in there . The Cult’s leaders take advantage of their life for their own cultic interests.

In this regard , The Ancient Iran Association proclaims that is ready to help those victims who are stranded in the felon Rajavi cult’s clutches.

With our sincere hails and greetings to you and the honorable people of Iraq.