Whenever possible, Rajavi has sought refuge in historical, popular, and revolutionary figures of Iranian history to justify his anti-national activities during years of his so-called revolutionary struggle. In other words, he misuses the repute of the distinguished Iranian freedom fighters as well as the leaders of social revolutions, particularly in the recent century, like Sattar Khan, Baqir Khan and Modarres to cover up his political scandals. The reputation of these leaders is due to their patriotism and can never be compared to the notorious status of Rajavi in the Iranian history and the mind of the public. He can hardly claim to be truly struggling for the independence and freedom of Iran. Evidently, all leaders of social movements in Iran had fortes and failures yet their actions are highly different from that of Rajavi who is a dishonorable traitor. While the Iranian history has recorded the above mentioned and even non-Iranian freedom fighters as great patriots and heroes, it never forgets those quislings like Rajavi who betrayed their country allied themselves with the invaders against their home country and took the oath of cooperation with the enemies of their nation.

Rajavi is making his utmost attempt to parallel his anti-national activities with those of admirable historical figures of Iran who sacrificed their lives to secure the independence and freedom of their land. Despite the temporary dominance of the invaders in Iran, they never took the path of Rajavi to collaborate with the foreigners under the pretext of freedom fighting. However, the position of Rajavi in the Iranian history is like a stigma evident and it is not clear how he can justify his notorious past record of perfidious deeds, besides his fruitless lobbying with the EU, USA, and France as the opponents of the independence of Iran, that made other associate oppositions ashamed of their alliance with MKO. The fact is that those trying to judge him according to Marxist thought and analyses are intentionally neglecting the real cultic nature of his activities that cannot be analyzed within any framework. The main mistake of these leftist and rightist individuals and groups is that they still judge Rajavi in the framework of a fallible revolutionary, political, and idealist individual in political arena. They aim to hide the real visage of Rajavi under the banner of criticism yet they ignore the fact that Rajavi has never recognized their legitimacy since Rajavi has proved that he does not consent to anything less than being totally submitted to and admired.

Those who insist to put Rajavi among the ten top figures of Iranian history are in fact deriding themselves. How Rajavi dares to parallel himself to these historical figures is due to the fact that his advocates and supporters are not aware of their real position in the Iranian history. While he bears no one but himself as the leader of the Iranian contemporary history, he has to resort to this parallelism for winning legitimacy. However, his position takings are different from his intra-organizational viewpoints on these individuals. For instance, though Rajavi appreciates Mosaddeq as the leader of nationalization of oil industries in Iran, Mosaddeq is described as a man of the bourgeoisie class and a descendant of Qajar, the dynasty previous to Pahlavi, who failed to find a true social path in his life to side with MKO.

Moreover, despite the fact that Rajavi approves the anti-tyrannical and anti-colonial struggles of Mirza Koochak Khan, the distinguished Iranian leader of the Jungle Movement, and claims himself as his follower, he had no qualms about calling him a reactionary and backward-looking person whenever he came to analyze his movement for the insiders. Also in regard to Modarres, although Rajavi highly esteems him in out of the organization relations, yet he criticizes him as a dogmatist who stood against republicanism as a barrier to hinder Iran’s historical and economic progress toward Socialism originated revolution. Likewise, almost all historical figures have the same typical duality for Rajavi. On the one hand, he admires their activities for the sake of demagogy and on the other hand, they are accused and criticized in the intra-organizational analyses of MKO. This may clarify the depth of the insincerity and fraudulency of Masoud Rajavi in misusing historical figures. The ideological subordinates of Rajavi who have deified him have no other choice but to follow him blindly in his hypocrisy. 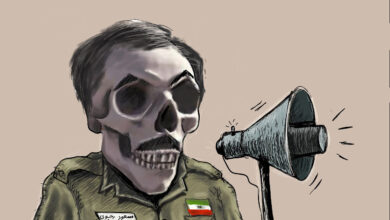 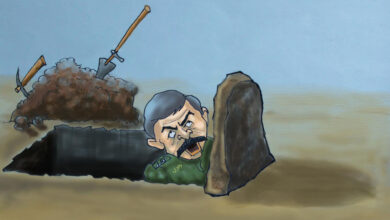