Local officials in Diyala province said on Saturday that leaders Pople’s Mujahedin Of Iran (PMOI) or the Mojahedine Khalq refused, again, to let the families coming from Iran to enter Camp 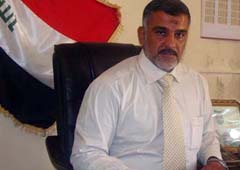 Ashraf to meet their sons on the pretext that they belonged to Iran’s security agencies.

A large delegation of the local administration, elders and dignitaries of the areas went to the camp today to persuade the leaders of Camp Ashraf to let the families coming from Iran to meet their sons, according to mayor of Al-Khalis city, Uday Adnan Al-Khaddran.

"This attempt, like the first and second attempts faced the intransigence of Ashraf leaders. They did not agree on the entry of the families of the members," Al-Khaddran said.

Dozens of families from Iran are on a sit–in since February 8, in front of the camp’s gate, in an attempt to persuade the leaders of the camp to let them meet their sons who are members of the PMOI.

PMOI accused the families in front of the camp’s gate of being Iran’s security agents.

But Al-Khaddran attributed Ashraf leaders refusal to let the Iranian families in to "fears" of the leaders of revealing their practices with the deluded people who wish to return home, on the one hand, and to prevent the world from knowing the secrets and mysteries of collaboration with, and the support of the organization, for militant terrorist groups, on the other hand, as he put it.

There area three thousand 3,400 residents in Camp Ashraf who had warned that the withdrawal of U.S. troops from the camp and handing it over to the Iraqi government would pave the way for a "humanitarian disaster"

Mujahedine Khalq described an effort by a number of sheiks and dignitaries of Diyala province on June 19 to end the ongoing suffering of the Iranian families outside the camp’s main gate as an "attempt to agravate the crisis against Camp Ashraf as a prelude to attack the camp again", according to an statement released by the organization.

On 28 July 2009, hundreds of Iraqi police and army troops attacked the Camp Ashraf and clashed with the PMOI members in the camp, and according to the organization 13 of their members were allegedly killed and more than 500 were injured.

Camp Ashraf or Ashraf City is situated northwest of Khalis town, 66 kilometers north of Baghdad. Camp Ashraf is currently an Iranian refugee camp in Iraq guarded by the United States military. Some 3500 PMOI members reside the camp. On January 1, 2009 its control was formally transferred to the Iraqi government.

Mujahedine Khalq was formerly on the list of "terrorist" groups in America and Europe, but the situation began to change when it helped to identify some of the secrets of Iran’s nuclear program, which represents a crisis between Tehran and the West.

Mojahiden E-Khalq is an opposition group led by Massoud Rajawi. It was founded in 1965 and played a major role in fighting the Shah and ousting his regime, PMOI supported the former Iranian President Bani-Sadr in facing the religious institution in the early eighties when they engaged in bloody clashes with the Iranian government that claimed many of the groups members and many others were arrested. It resorted to exile to continue its war against the "Islamic Republic" under the slogan of building an alternative "Islamic democracy" state.

During the U.S.-led 2003 invasion of Iraq, the group’s sites were bombed by the U.S. and British forces and considered it as a part of the Iraqi formations, but the U.S. troops maintained security of the camp after the war was over and according to an agreement they were allowed to keep their weapons, stay in Iraq and continue their armed struggle against Iran, which raised Tehran’s worries that prompted some of its officials to describe America as a "liar" in its campaign against terrorism.