The Minister of the Ministry of Human, Mohammed al-Bayati discussed with the High Commissioner for

According to a statement of the ministry, al-Bayati demanded UNHCR of the possibility of reviewing the 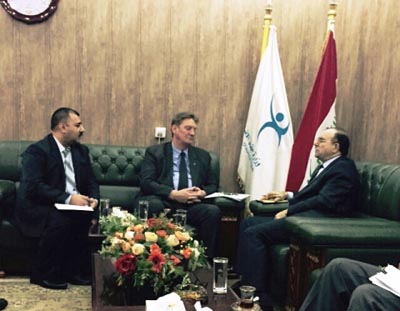 available information database of the residents of Rafha Camp about them who have been registered in the Red Cross when they entered Iran after leaving Saudi Arabia to verify it to include them with privileges granted to them under political prisoners Corporation Law.

He explained that the Iraqi government is working hard to recover property of Faili Kurds as well as giving them the Iraqi nationality and provide them with all the official documents which increases their integration into the economic and social life.

He added that the ministry is currently working on Faili Kurds file through bilateral meetings with the Iranian embassy in Baghdad and coordination in returning those who wish to return to Iraq, depending on the approach of voluntary return and compensate the victims in accordance with Iraqi law in force.

With regard to the problem of displaced , The Minister said according to the statement that there are local , international and regional organizations working to provide aid and relief to those displaced people who fled to central and southern Iraq.

For its part, Rights stressed that the problem of the Mojahedin-e-Khalq Organization (MKO) in Iraq on its way to a solution where the Albanian government received numbers of them, and some states refused their requests for asylum.

At the same level, the Iraqi Minister added that the Iraqi government is working to bring the families of the People’s Mojahedin of Iran for the purpose of meeting them in Baghdad as part of a humanitarian mission undertaken by the Government.