The Tehran Centre of Nejat Society reported that Maryam Sanjabi and Ebrahim Khodabandeh, former members of the Mojahedin-e Khalq Organization (MKO, aka Rajavi Cult) participated in the International Conference on World Against Violence and Extremism (WAVE) in Tehran on 9-10 Dec. 2014. During this conference, Ebrahim Khodabandeh had an opportunity to speak with Iraq’s Minister of Foreign Affairs, Ebrahim Jafari. Khodabandeh talked about the problems faced by the families who wish to visit their loved ones in Camp Liberty in Iraq, but who are denied that right by the MKO cult leader Massoud Rajavi. 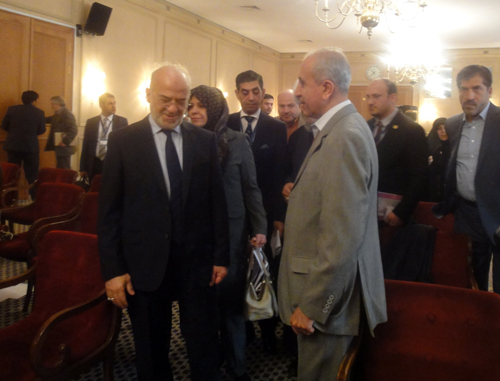 Nejat Society’s report states that “over the two days of the conference, Sanjabi and Khodabandeh spoke to participants to give a brief report about the latest situation of Rajavi’s mind manipulating destructive cult (MKO). They emphasized the need to establish contact between the individuals trapped in Camp Liberty in Iraq in the hands of Rajavi, and their suffering families. In all cases, without exception, the addressees approved the necessity for this basic right to be fulfilled and made promises that they would do everything possible in their capacity to help this human rights issue which is the result of the whim of a violent extremist leader of a cult.”

According to the report, “Ebrahim Khodabandeh also met Ebrahim Jafari, Iraq’s Foreign Minister, and delivered to him the pleas of the families who anxiously want to visit their loved ones in Iraq. Mr. Jafari expressed his sympathy with the families and promised to try to help them. In this meeting Mr. Jafari emphasized that the MKO is a terrorist cult which has committed many crimes against the people of Iraq and confirmed that it is the wish of all factions and tendencies that they should leave the country and that their leaders be prosecuted. He said that preventing the families from visiting their relatives shows by itself the nature of the leaders of this group.”

Sahar Family Foundation, which represents the suffering families of MKO members trapped in Camp Liberty in Iraq, wishes to thank Ms. Sanjabi and Mr. Khodabandeh, family rights activists, for their efforts and hopes that all those who actively work toward gaining the most basic rights for the families’ success in their good work.