Washington-backed terrorist cult, Mojahedin-e Khalq (MEK), says the families of members and the Government of Iraq are stopping supplies getting into the camp. 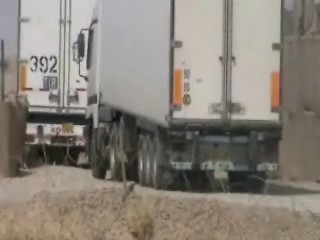 This film, taken by the families who have been waiting at the gates for over eight months to have meetings with their relatives, shows a convoy of 17 supply vehicles entering Camp Ashraf without hindrance.

On this occasion, an 18th vehicle was refused entry for legal reasons, after it was searched by Iraqi soldiers.

An Iraqi official at the camp rejected the Mojahedin’s allegation as lies and said the Government of Iraq is doing all it can to assist the people inside the camp and has offered extra help which has been refused (MEK leaders have refused to allow some members who are seriously ill to be transferred to specialist hospital facilities in Baghdad). He also explained that vehicles are searched to prevent illegal items, such as arms, being taken into the camp.Download Mojahedin-e Khalq lies exposed by Government of Iraq and families of members at Camp Ashraf