On Monday October 4th, 2010 a number of Iraqi tribal nationals from Salahuddin Province including Doctor Nafe’ and Ms. Dm-i-Ali offered their sympathy to families who are on strike in front of Ashraf gates. Iraqi journalists were also present at the meeting that lasted a few hours.The tribe’s deputies said that they had had no idea of the families strike at Camp Ashraf and MKO had abstained to respect such a reasonable right.They promised to pursue the case in Iraqi judiciary and media. During the visit a few recently defected members of MKO also spoke to the audience by clarifying the current atmosphere ruling the cult. Their descriptions caused extreme wonder among the attendees. 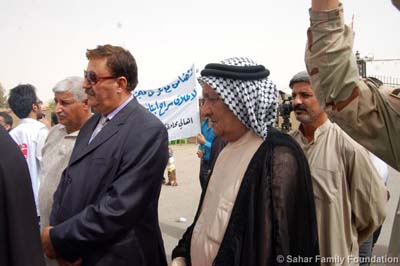 McCain, Al-Maliki meeting in Baghdad rising hopes for the victims of MKO