On the occasion of Christian’s New Year, charity organizations all over the world become more active to collect donations for the poor. The act of benefactors who are concerned about human’s needs is really praiseworthy but there is also a dark side for such activities. There are some fraudulent organizations that misuse the opportunity to raise their own funds by soliciting people. Mujahedin Khalq Organization has a long record of such deceitful activities. 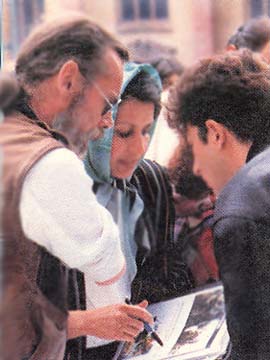 The first time MKO and its front organization were investigated for fraudulent fund raising activities, was in 1996 in Britain. UK Charity Commission which is a governmental body to supervise charity institutes began investigation on Iran Aid Charity that was then proved to be a front group of MKO Cult. In 1997, UK Charity Commission closed Iran Aid Charity after it was proved to be linked to Mujahedin Khalq Organization.[1]

In September 2000, Simon Gillespie, director of operation at UK Charity commission told news media," after two years’ investigation, Iran Aid has failed to give us verifiable evidence that money donated by British public was actually spent on charitable work in Iran."[2]

About a year after UK’s probe against MKO, in March 2001,"five Iranian nationals and two Iranian Americans appeared in federal court in Los Angeles on charges of raising more than $1 million to fund terrorist activities abroad," reported Los Angeles Times. The report clarifies that most of the money was solicited from unsuspecting travelers at LA International Airport and sent to bank accounts in Turkey controlled by MKO. James V. De Sarno Jr. an authority of FBI Los Angeles office said that the "suspected money has been used to buy arms.” The travelers were shown photos of starving children and victims of alleged Iranian government atrocities and told the money was used to support refugees, according to LA Times.[3]

In 2009 Federal Bureau of Investigation of Los Angeles reported the seven arrested MKO members were pleaded guilty by US District Court, Judge David O.Carter. The seven defendants admitted that they knowingly raised funds to support the activities of the MEK by collecting money from MEK supporters and soliciting money from unwilling donors at public locations such as Los Angeles International airport, according to Department of Justice Press Release.[4]

MKO’s deceptive fund raising activities did not end in US District Court. The opportunists of Rajavi’s Cult also use human disasters as an appropriate channel to funnel money in to the cult’s pocket. In January 2004, after the catastrophic earthquake in Bam, Iran, Mujahedin Khalq held their so called "night of solidarity with Bam Survivors."FBI agents attended the event because they doubted legitimacy of the event, and the next day the Treasury Department froze the assets of the event’s prime organizer, the Iranian – American Community of Northern Virginia.[5]Jackie Flowers who was asked about the events relation with bam earthquake is a spokesman for the Red Cross. She told Glenn Kessler of Washington Post that “the relief agency had been contacted by the sponsors about receiving funds raised at the event several weeks before it took place. But the Red Cross decided to reject the proceeds once it became aware that the event was ‘political in nature’, specifically the promotion of regime change.” [6]

The money laundry projects in MKO have always been active. In January 2010, a disastrous earthquake struck Haiti that paved a new way for MKO to raise their funds . Since MKO agents are more active in Scandinavian countries, their propaganda and fund raising champagnes have a network of front organizations in those countries to lead the group’s tactics. Following the earthquake in Haiti Swedish people were among the top donators to contribute Haiti earthquake victims but the fraudulent groups like MKO were ready to manipulate people’s emotional feelings. Thus, the Swedish government body, Council of funds raised by volunteer charity organization of Sweden (FRII) ( Frivilligorganisationernas Insamlingsråd ) published a list in the country’s media to prevent such organizations misuse people’s donations. MKO was among those untrustworthy-considered organizations: Mojahedin’s Sympathizers Society (MSF),the Promotion of Iranian Culture (FIK) and Association for Democracy and Human Rights in Iran (FDMRI) are the three front groups affiliated to MKO that are listed by Sweden.

On the eve of Christmas Sweden government once more published that warning list to prevent financial abuse committed by those deceitful groups. In the updated list you may find again the name of Mujahedin front groups.[7]

Erik Zachrison from that Swedish Council told about the list:" I don’t know their nationality and they have not managed to present a registered number for their organization. I just know they are active all over Sweden and they do not own the account "ninety" and they have never asked to register for one. They stop people in the streets, showing brochures or pictures and for example ask them if they know Amnesty Intentional and then ask for financial help. A lot of people think they are helping that mentioned international body." [8][Account ninety is a bank account allocated to charity organizations that are lawful in Sweden].

Association for people and Freedom (VMF), Association for the hope of future (VHZ), Human Rights Association for migrants that according to DZI are associated with Mujahedin Khalq terrorist organization advertize with street collection campaign, with letters and even home visits for donations by often highly moving and gruesome images of tortured and killed people. DZI declared that it had received a lot of letters of complaint from parties which were visited for personal interviews in their houses and offices. They were requested to donate high, four-digit sums of money to their alleged human right organization. [9] On December 9th, 2010, DZI updates its monitoring report maintaining the name of the three above-mentioned front groups.[10]

Deceptive charity actively is a way to launder money which is often used by terrorists and criminals. Their illegal activity can also include, smuggling trafficking, extortion and corruption. MKO terrorists have to launder the proceeds from their fund raising activities in order to be able to use them to run their propaganda machine and terror campagne. Fighting against corruptive financial activities should be a mission for all governments, especially western countries who are mostly at risk of being manipulated by MKO agents since their true face is known to Iranians but not for them. Western citizens must be informed about peril of transacting with front organizations actually linked to a destructive terrorist cult because the group’s consequent terrorist acts constitute threats to their safety and security.