Mujahedin Khalq as a bargaining chip for Allawi bids

Sources privy to Iraq’s al-Iraqiya alliance unveiled that the alliance’s head, Ayad Allawi, had unsuccessfully tried in October to persuade Tehran to support his bid for Iraq’s premiership, but his offer for cutting a deal with Tehran was strongly rejected by the Iranian officials. 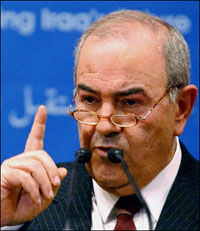 The sources said that Allawi had conveyed his demand and offer in a letter delivered to Tehran through a Syrian national who acted as a third party, but Tehran had strongly rejected Allawi’s demand for Tehran’s interference in Iraq’s internal affairs.

Iraqi Nahrin Net website quoted the unknown sources as saying that the move has sparked fury among the Iraqiya alliance leaders and that they are still mad at Allawi for his call on Tehran.

According to sources, Allawi had pledged to expel members of the anti-Iran terrorist Mojahedin-e Khalq Organization (MKO) from Iraq’s soil in a bid to attract Iran’s help and support for his bid.
Allawi had also vowed that in case Tehran supported his bid, he would support further expansion of bilateral ties with Tehran and establish joint commissions to study developments of common concerns.

Regarding Tehran’s reaction to Allawi’s confidential demand, the sources said, "Tehran’s answer was surprising since they sent a message through the same mediator saying that the Prime Minister’s post is an internal issue and is related to the Iraqis and Iran respects all political groups in Iraq."

The news comes just weeks after the Iraqi parliament finally approved Nouri al-Maliki as the country’s next prime minister and gave a vote of confidence to the three deputy prime ministers and 31 ministerial candidates nominated by Maliki on December 21.

Also :
Sources close to Iraqi political bloc al-Iraqiya said leader Iyad Allawi in October had attempted to persuade Iran to support his bid for prime minister but that Iran rejected the request, Fars News reported Jan. 5. The sources said Allawi sent a letter requesting support through a Syrian national who acted as a third party. In the request, Allawi said if Iran helped him, he would expel members of anti-Iranian militant group Mujahideen-e-Khalq and would support further expansion of bilateral ties. Tehran’s answer was that the post of prime minister is an internal Iraqi issue.
stratfor.com