People in Iraq’s Diyala province organized a protest in front of Camp Ashraf where the Mujahidin Khalq organization or MKO members are residing.

The protesters who had come from Basra, Tekrit, Baghdad and Diyala called for the expulsion of the terrorist group from Iraq whose presence they said was a source of instability and a cause of 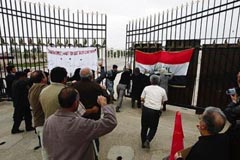 concern for their country. Tribal leaders, clerics and local officials were among those who had taken part in the protest.

The Iranian relatives of some MKO members also joined the protesters, to ask for the release of their family members who are said to be held inside the camp against their will. According to a Human Rights Watch report, the group puts defectors under torture or in jail.

In response to the protest, the MKO members gathered behind the safety of barbed wire, hurling stones and insults at the protesters.

Iraqis accuse the organization of involvement in the killing of their compatriots during the rule of former dictator Saddam Hussein.

Meanwhile the Iranian families praised the initiative taken by the Iraqi citizens who gathered at camp Ashraf to make their concerns heard, saying that those countries supporting the MKO should rethink their stance towards the group.

MKO has been in Iraq’s Diyala province since the mid 1980s and was part of Saddam Hussein’s war against Iran during that period. The group which is listed as a terrorist group by Tehran and much of the international community is especially notorious in Iran for having sided with former Iraqi dictator during the 1980-1988 Iran-Iraq war.

After a recent meeting with the caretaker of Iranian foreign ministry in Baghdad , Iraqi Foreign Minister Hoshyar Zebari expressed hope that his country would expel the group in the future.
Following the 2003 US-led invasion of Iraq, US troops disarmed the MKO members at the camp to hand over control of the place to the Iraqi security forces in 2009.