The film shows an Iraqi soldier going to investigate an encounter at one of the boundaries of the camp. The two men on this side of the fence are, an MEK member (in buff jacket) who managed to escape the camp only several months ago, and an Iraqi Farsi translator (in black jacket and holding walkie talkie). The MEK member inside the camp is angrily gesticulating and shouting at the two outside telling them to go away and starts throwing stones. 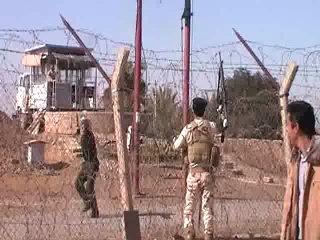 Over the past few months the families have begun approaching the fence all around the camp perimeter trying to engage with the members inside and talk with them. In order to prevent them from contacting the ordinary members, Rajavi has introduced an extra security system to try to force them back. Undaunted the families continue to approach the fence and engage with the MEK’s security force.

The systematic nature of the security patrol is clear. The MEK have introduced extra lookout posts around the perimeter mounted on trucks. There are also mobile patrols which travel the perimeter road watching for the families. When the patrols discover the families approaching, the MEK security forces are mobilised. These forces are organised. They do not engage with the families but are immediately hostile. They quickly escalate the encounter from aggressively shouting at the families to go away and swearing at them, to throwing stones and using catapults to launch missiles (some of them made of metal scraps). This is not a spontaneous reaction but is a deliberate action to prevent the families getting close to the perimeter.

It is notable that the perimeter fence has been added to with the extension facing inward and the barbed wire all on the inside. This is clearly designed to keep people in rather than prevent anyone outside from entering the camp. It should be plain from this that Camp Ashraf has become a prison for the ordinary members.