MKO defected members in a Press Conference in Iraq

The spokesperson of the Iraqi defense ministry said members of the terrorist Mujahedin-e-Khalq Organization, MKO, escaped Camp Ashraf and surrendered themselves to the Iraqi forces.
He said the defected members have given useful information and the Iraqi government now has the required evidence to shut down the camp. 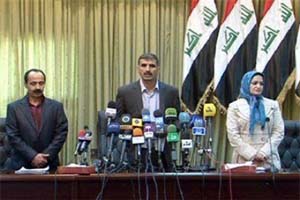 In the press conference that was organized by the Iraqi defense ministry, the defected MKO members said since the US led invasion of Iraq in 2003, the leaders of the organization have changed their strategies and turned the camp into a prison and the residents of the camp are completely cut off from the outside world.

They also said since 2003, the leaders of the camp have trained the members to encounter the Iraqi forces if they tried to enter the camp. The said MKO ringleaders are using torture and pressure on their own members, barring them from leaving the organization and joining their families.

The former MKO members said many residents of Camp Ashraf, who are under immense pressure, want to escape but are afraid and unsure of the future. The said scores of MKO members have been killed by the organization recently.

On April 8, 34 people were reportedly killed in clashes between Iraqi security forces and MKO members residing in the camp north of the capital Baghdad. Iraqi forces claim that according to evidence, these people have been killed by the organization itself.

The group fled Iran to Iraq in 1986, and set up Camp Ashraf in Diyala near the Iranian border. The MKO has carried out many acts of terror against Iranians and cooperated with Saddam in suppressing the 1991 uprisings in southern Iraq.