A United Nations statement issued late Saturday said it expected an Iraqi government inquiry into the Iraqi military’s deadly April 8 raid on a People’s Mujahideen Organization of Iran (PMOI) camp to be independent.

The United Nations has called on Iraq to hold an independent investigation into the killings of 34 people at an Iranian opposition base after Iraqi authorities who authorized an April 8 raid on the camp suggested that the group might have executed its own members.

Wildly conflicting accounts of how the members of the People’s Mujahideen Organization of Iran (PMOI) were killed have highlighted the dilemma over the last remaining stronghold of the group invited into Iraq by former leader Saddam Hussein and disarmed by the United States.

The UN statement issued late Saturday said it expected a commission of inquiry pledged by the Iraqi government to be independent. The commission planned by the government will include prime ministry and Iraqi military officials as well as a cross-section of political parties, and is unlikely to meet that requirement.

Iraqi government spokesman Ali Dubbagh said earlier this week that some of the dead were likely executed by camp leaders trying to prevent them from leaving.

An adviser to Prime Minister Nouri al-Maliki, Saad al-Matalabi, said forensic tests that included US experts have been completed on the bodies to determine whether a medical team’s initial findings had been correct.

“They were shot execution-style,” Mr. al-Mutalibi told the Monitor. “The first medical reports indicated they were shot at very close range – gunpowder was found on the wounds.”
He also said they appear to be have been shot with handguns rather than the rifles used by the Iraqi military.

The UN earlier this week confirmed it had seen 28 bodies in a visit to the camp and knew of six others. It said dozens more had been injured in the operation before dawn on April 8 when Iraqi forces moved in to reclaim part of the huge base 70 miles north of Baghdad.

It said in the statement that it had repeatedly urged the Iraqi government to refrain from the use of force.

The Iraqi government initially said three PMOI members had been killed in the military operation and said they were crushed by moving vehicles. It denied that Iraqi soldiers had fired at protestors trying to stop the soldiers from moving into an area that houses the organization’s cemetery. Speaking to reporters taken to Camp Ashraf after the raid but barred from talking to camp members, Iraqi military officials displayed slingshots and home-made weapons they said the PMOI had used to attack Iraqi soldiers. Women, they said, had tried to gouge out the soldiers’ eyes.

Video released by the group, heavily edited and impossible to verify, appears to show Iraqi soldiers firing weapons as well as armored vehicles crushing some of the demonstrators. Another PMOI video released last week showed rows of bodies, many of them women, wrapped in white sheets and laid out as martyrs on the pavement inside the camp.
Iraqi officials say almost one-third of the more than 3,000 people at Camp Ashraf have foreign passports, including Americans and many Europeans. It was not clear whether they were among the dead. Some diplomats say the number with foreign passports is much smaller, even though 1,000 of the camp’s residents have ties to countries in the West.

US considers PMOI a terrorist group

The United States considers the PMOI a terrorist organization but has said in the past it would not bar members from returning if they are not personally wanted by legal authorities. While Iraq has made clear it intends to shut down the camp by the end of the year, members of the cult-like organization refuse to leave and other countries are reluctant to take them.

The Iraqi government has been under intense pressure from Iran for years to close the camp.

Camp Ashraf was the main military base of the organization invited by Saddam Hussein into Iraq to launch attacks on Iran in the 1980s.

After 2003 they agreed to give up their tanks and artillery in exchange for US protection and the designation of non-combatants while hostilities continued. But the US military handed over the camp when Iraq took over responsibility for security throughout the country two years ago.

The United States, which is reluctant to publicly criticize Iraqi authorities, has said it is ‘concerned’ by the report of the deaths. 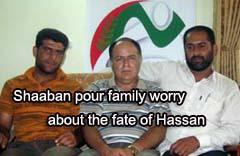 Hassan has been captured in Ashraf for more than 2 decades

Maryam Rajavi and 12 months to overthrow