Iraq has expressed determination to expel the terrorist Mujahedin-e Khalq Organization (MKO) from the country by the end of the current year after issuing ultimatums over the past eight years.
In an interview with Fars News Agency in Baghdad, Iraqi government spokesman Ali al-Dabbagh said the only option open to MKO members was leaving Iraq. 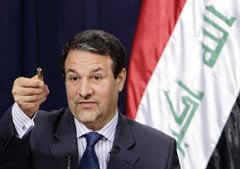 The senior Iraqi official added that helping Saddam Hussein massacre thousands of innocents in Iraq is merely an example of the crimes committed by the MKO.

The Iraqi government announced on April 11 that the cabinet was determined to shut down Camp Ashraf in Diyala Province, located some 60 kilometers (37 miles) north of the capital Baghdad, and expel the terrorist MKO group.

The MKO was founded in Iran in the 1960s, but its members fled to Iraq in the 1980s after carrying out a series of assassinations and bombings inside the country.

The MKO cooperated with Saddam in suppressing the 1991 uprising in southern Iraq and the massacre of Iraqi Kurds.

Following the ouster of Saddam in 2003, the Iraqi government has set numerous deadlines for the terrorist group to leave the country but MKO has managed to maintain Camp Ashraf due to US backing.

Who Breaks Deadlock over MKO Relocation?