Iraqi security forces say they have managed to discover a hidden munitions depot inside the terrorist Mujahedin Khalq Organization’s (MKO) Camp Ashraf in Diyala province north of Baghdad.
Local officials say that US troops had earlier claimed that they disarmed the MKO terrorists in the camp but that has turned out to be no true, it seemed that was not true, a Press TV correspondent reported Monday. 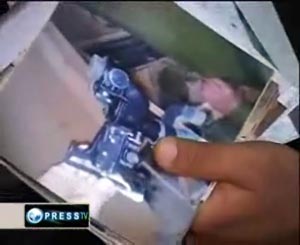 Camp Ashraf served for years as the armed training base for MKO members and provided the Iranian terrorist group with a massive shelter by former Iraqi president Saddam Hussein,
The Mayor of Al-Khalis, where the camp is located, displayed photos of the weapons discovered in the terrorist camp and said that they were buried inside the Ashraf camp. 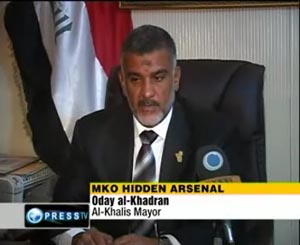 Meanwhile, Diayala police chief said that MKO leaders had claimed that they have already handed over 17,000 pieces of weaponry to American troops since the US-led invasion of Iraq in 2003.

“If the MKO had 17,000 pieces of weapons then how many hidden weapons do they have now? We confirmed that they attacked us with knives and tear gas,” Diyala Police chief Abdul Hussein Damouk said.

Recently, MKO claimed that the Iraqi security forces killed more than 34 of its members in the group’s latest clashes with Iraqi troops in April. However, AFP reported that only 10 terrorists were killed.

Iraqi officials say the clashes erupted when members of the camp began hurling stones and attacking security forces with knives and other weapons while they were carrying out their field duties.

Two days after the clashes, the Iraqi defense ministry held a press conference inside the camp to show that MKO claims were baseless.

Since the 2003 US-led invasion of Iraq, the group has received backing from a number of US lawmakers who continue to argue that the MKO terror group should be removed from the US international list of groups that support terrorism.

However, in line with the new Iraqi constitution, Baghdad government has vowed that it is determined to expel MKO terrorists from Iraq by the end of 2011.

Iraqi government spokesman Ali al-Dabbagh has recently said that the cabinet is determined to shut down the Camp and disband the terrorist group.

Most MKO terrorists fled Iran after they carried out a large number of terrorist assassinations and bombings in1980. They formally settled in Iraq in 1986, enjoying full support of former Iraqi dictator Saddam Hussein.

The MKO is responsible for numerous acts of terror against Iranian civilians and government officials as well as many Iraqi civilians that opposed the rule of the country’s last brutal dictator.
More than 3,000 MKO members reside at Camp Ashraf. In addition to cooperating with US operatives in Iraq, the MKO reportedly dispatches its elements from the terror camp to Iran to carry out espionage and terrorist operations for some Western countries.Download Iraq unveils MKO’s hidden weaponry