This interview is from the KPFK 90.7 FM Los Angeles broadcast of August 12th. 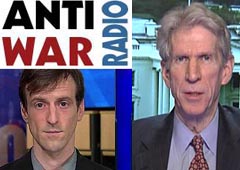 Gareth Porter, independent historian and journalist for IPS News, discusses the infamous “laptop of death” documents from which the vast majority of “evidence” about Iran’s supposed clandestine nuclear weapons program comes from; the conspicuous mistakes in the documents that lead him to believe a foreign intelligence agency (probably Mossad) fabricated them; how Iran’s refusal to turn over military missile blueprints (which are none of the IAEA’s business) got them labeled “uncooperative” and sanctioned by the UN; and how the MEK launders information, passing off documents sourced from Israel as their own.
Download Antiwar’s Scott Horton interviews Gareth Porter on MEK