Ashraf Camp in northeast Iraq to a new location, a UN statement, copy of which was received by Aswat al-Iraq news agency, reported.

It pointed out that the MOU was signed by the UN Secretary-General’s Special Representative in Iraq, Martin Cobler and the Iraqi Council of Ministers’ Adviser for National Security Affairs, Faleh al-Fayad.

"The United Nation’s attention in this issue had stemmed from a mere humanitarian viewpoint, as it had exerted its utmost effort to find out a neutral, peaceful and permanent settlement for the affairs of Ashraf residents conditions," the statement stressed.

The statement added that "the MOU respects Iraq’s sovereignty and international humanitarian commitments, related to Human Rights, as well as those stemming from the human rights of Ashraf Camp’s residents, "confirming that the residents of the new location of Ashraf would commit themselves for Iraqi laws.

It also stressed that "the MOU was reached through several joint meetings between representatives of the UN and the Iraqi government, and following serious consultations by the UN with the Camp’s residents."

The UN Representative had made it clear that "the MOU would pave the way for a process, according to which the Iraqi government would help to transfer the Camp’s resident to a temporary location, in such a way that would help the United Nations Commission for Refugees Affairs to appoint a team in the new location, that would begin to check demands for immigration that it would receive and finalize such demands."

It also confirmed "a clear commitment by the government of Iraq that it would secure the safety and security of the residents of the new location, as well as the government’s commitment to assure the Iraqi Human Rights Ministry’s active participation in all the stages of the process, including the appointment of a special officer to organize the relationship among all parties."

The UN Representative said: "We would like to make it very clear that this MOU is related to the voluntary transfer, and its implementation strongly depends on the participation of all parties to act in a peaceful manner and good intention, in such a way that would allow the UN to contribute in the process."

"I would like to point out that the (Iraqi) government is the sole responsible for the safety and security of the said residents, during the process of their transfer and in their new location, till their departure from the country; and I repeat my call for the UN member-states to accept the residents of the Camp in their countries," he said.

Noteworthy is that the Iraqi government had issued a decision to end the presence of Mujahedin E-Khalq Organization in Iraq before the end of the current year of 2011, charging it as being a "terrorist" organization, that had participated in killing Iraqis.

The anti-Tehran Organization uses the Ashraf Camp in northeast Iraq’s Diyala Province, as its location since it had moved its command for Iraq in 1985, during which it had enjoyed support by the former Iraqi regime, including the launching of attacks against Iran. 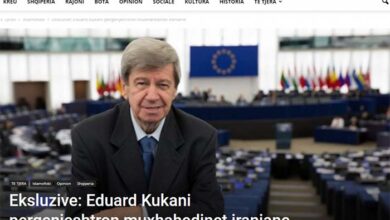 The Rubicons That Have Been Crossed