The achievements of two years of families picketing

As you know, an agreement has been struck between UNAMI, the Iraqi Government and the

leaders of the Mojahedin Khalq Organisation according to which the camp should be evacuated by the end of year 2011.

Also, according to this agreement the deportation of Mojahedin Khalq will be delayed by another 6 months in which time the UNHCR would be able to register the residents and carry out individual interviews in preparation to transfer them to other countries.

According to the Memorandum of Understanding, an initial 400 of the residents of Camp Ashraf are to be transferred to the former American Camp Liberty adjacent to Baghdad Airport, but to this day, 30th December 2011, the leaders of the Rajavi cult have rejected the planned transfer by bringing all sorts of reasons and excuses, clearly against the agreements accepted by the other two parties involved (UNAMI and the GOI).

Today it is clear to everyone that the leaders of the Rajavi cult like all similar cults anywhere in the world which use destructive mind control methods do not see themselves bound by their words or their signatures. It is now clear that they are more than anything else afraid that their forces (hostages) would run away during this transfer. Sooner or later, Rajavi will have to give up Ashraf garrison – which is situated on land illegally and forcefully confiscated by his benefactor Saddam Hussein where he built a military base which he later gifted to the Mojahedin Khalq. Sooner or later he will have to face the fact that the members will be deported from Iraq.

It is worth mentioning the continuous hard work of the families of the people trapped inside the camp who have stayed by the camp for the last two years and demanded their human rights from their base, which they call Freedom City, built adjacent to Camp Ashraf. They exposed the lies of Rajavi and they proved that the leader of the Mojahedin Khalq cult has no respect whatsoever for the people and the loved ones taken hostage inside the camp. 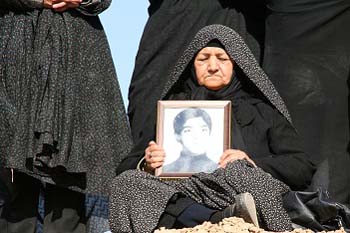 It is now clear to everyone that it is the fathers, mothers, children and spouses of the trapped people who represent the best interest of the hostages and not the leaders of the cult. 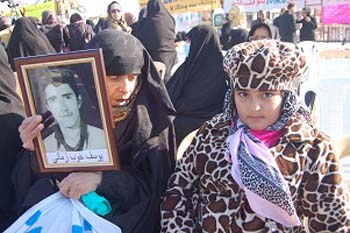 The agreement between all parties to sort out the problem of Camp Ashraf could not have been achieved without the hard work and the suffering of these families, especially during the last two years. They have worked flat out for the last two years in Freedom City, adjacent to Camp Ashraf for two years and intend to do so for as long as it takes. It is clear that even after the transfer of Rajavi’s hostages to a new location, the families will not rest until they achieve their minimum demand of private visits with their loved ones. The hope of reaching this goal is now greater and nearer than ever and the number of families is continually increasing in number. They have all decided to finish the quest that began two years ago and to not give up until they have achieved their simple humanitarian demand of ‘Right of Visits’ with their captured relatives.

SFF on behalf of the picketing families would like to extend its appreciation to all the survivors and ex-members, as well as human rights activists in Iraq, Iran and other countries who have been aiding and supporting the families and helping their voices be heard in the world.

With the hope that one day soon the goal of the freedom of every one of our loved ones takes the tiredness of all these years off our bodies.

Families determined to bring hope and love back to Ashraf residents