The Obama administration and top former officials are reportedly violating federal law by offering support to the Iranian Mujahedin-e Khalq , a notorious Islamic-Communist terror group that has

The U.S. government is, among other support measures, currently helping to relocate members of the MEK to a former American military base in Iraq. It is also assisting the group to settle around the world as refugees in a controversial deal brokered with help from the new Iraqi regime and the United Nations. 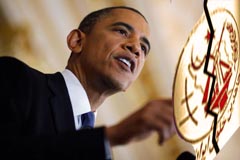 Outraged critics called the administration’s support for the terrorist group an act of “high treason” and “overt criminality.” But paid lobbyists, including politicians and top U.S. officials, have been waging an intense propaganda campaign on behalf of the MEK.

Incredibly, the organization’s supporters claim the transfer of MEK members to the former American base is unacceptable. The terror group’s leadership and its allies are demanding that members either be allowed to stay where they are or be relocated near the Jordanian border instead.

Several thousand members of the group had been living for decades near the Iranian border in Iraq’s “Camp Ashraf,” which analysts and officials have described as a militarized "cult" compound. And from 2003 until recently, the terror group was there under the protection of American forces.

The protection agreement with the U.S. government came after the group lost its former protector, Saddam Hussein, in the wake of the American invasion. Now, however, U.S. forces are officially out of Iraq and the new regime is supposed to be in charge.

Iraqi officials have recently tried — unsuccessfully — to evict the terror organization’s members from the camp. The efforts resulted in bloodshed, according to news reports. But the process of moving them finally began last month and is now well underway.

In an alleged bid to avoid further confrontations between the terror group and the new regime ruling Iraq, months of negotiations between the UN and American and Iraqi officials resulted in a plan to transfer the MEK members temporarily to “Camp Liberty,”[TTL] a former U.S. military base near Baghdad.

The terror group and its prominent American lobbyists, however, are crying foul, describing the former American installation — which was certified by the UN — as a sort of “substandard” prison. And an international controversy of sorts about the issue is growing.

The MEK, also known as the People’s Mujahideen Organisation of Iran (PMOI), was founded in a bizarre effort to blend economic Marxism with the values and beliefs of Islam — and impose the system by force. The group also helped Ayatollah Ruhollah Khomeini during the Islamic revolution that overthrew the U.S. government-backed Shah of Iran. But the warm relations soured soon after that.

America and capitalism have historically been the organization’s primary enemies. Violence and terror, meanwhile, were the means used to wage war. But after a series of terror attacks within Iran left top officials and hundreds of others dead, the Iranian regime unleashed a crackdown — attempting to dismantle the terrorist network once and for all.

The MEK was eventually designated a foreign terrorist organization in 1997 under the Clinton administration. But in recent years, the terror group has toned down its anti-American rhetoric and adopted a friendlier public-relations approach — spending millions of dollars on lobbyists and even dabbling in politics. Supporters hope to have the U.S. terror designation dropped eventually.

The group’s history, however, includes assassinations of more than a few senior U.S. military personnel, terror attacks on American installations, murder of civilians, and much more. Iranians and Iraqis have been victimized even more frequently.

The designated terrorist organization once fought alongside Iraqi dictator Saddam Hussein’s forces too, collaborating with the tyrant against the Iranian regime in the Iran-Iraq war. It even helped Hussein to quash domestic dissidents within Iraq as well.

Iraqis and Iranians, of course, remember the MEK’s partnership with the former despot in suppressing uprisings by rebel groups and slaughtering Iranians. And the bitter memories have led to growing hostility against the terror group among Iraq’s new rulers.

Since Hussein was overthrown by U.S. forces, the new government in Iraq has also become increasingly close to the Islamic regime in Iran. So, a conflict has erupted over the status of MEK members living inside Iraq as officials demand that Camp Ashraf be permanently shut down.

In recent weeks, convoys comprised of several hundred MEK members each have started arriving at Camp Liberty [Temporary Transit Location] from the group’s previous paramilitary compound near Iran. The second group of about 400 arrived last week. And thousands more are expected in the not-too-distant future.

Meanwhile, U.S. taxpayers are reportedly paying to improve the terror organization’s new temporary residence while the UN works to shuttle them out the country. According to news reports, the MEK members are supposed to be processed at Camp Liberty[TTL] as they await UN-sponsored relocation to other countries as refugees.

But the group’s leaders and their well-paid Western lobbyists have asked for Iraqi law enforcement and security personnel to be expelled from the camp while demanding upgrades to the facilities. And they have found sympathetic supporters around the world.

The Islamo-Marxist terror organization — which much of the press now identifies as a group of “dissidents,” “exiles,” and “refugees” — has especially found favor among advocates of war and regime change in Iran. Numerous reports and experts say the U.S. and Israeli governments have actually been working directly with the group for years, in violation of federal laws, to assassinate Iranian scientists, gather intelligence, and even carry out terror attacks on various targets.

But of course, Obama administration officials would hardly be the first to violate U.S. laws — which the Supreme Court upheld at the government’s request — by supporting the designated terror organization. Top neo-conservatives such as former New York City Mayor Rudy Giuliani and ex-Attorney General Michael Mukasey have been lobbying feverishly on behalf of the group too, along with a broad roster of former politicians and U.S. officials.

And over the last few months, a strange brouhaha has erupted between the Obama administration and the MEK’s highly placed roster of vocal lobbyists. Instead of focusing on the fact that it is a serious breach of federal law to provide virtually any form of support to a designated terrorist organization, former U.S. officials are alleging — very loudly, even purchasing full page ads in major newspapers — that the federal government is not doing enough to coddle the terrorists.

An article in Foreign Policy, citing an anonymous Obama administration official working on the issue, reported that the terror group is actually trashing Camp Liberty itself in a bid to make conditions appear worse than they are. The official also said the MEK’s high-profile U.S. lobbying activities are making it more difficult — potentially even dangerous — for the Obama administration to properly help the terrorists reach “good solutions.”

“We have a plan that has a chance to work and the Iraqis want it to work,” the administration source was quoted as saying. “Whether the MEK wants a resolution or wants a confrontation is something we’re still debating. It’s that bad."

Apparently investigators with the U.S. Treasury Department’s terror branch have started to probe at least one former official for accepting the terrorist group’s money in exchange for lobbying. Former Pennsylvania Gov. Edward Rendell said recently that he received a subpoena seeking documents related to his ties with the MEK.

A Treasury spokesman refused to either confirm or deny that the department was investigating. “But the MEK is a designated terrorist group, therefore U.S. persons are generally prohibited from engaging in transactions with or providing services to this group,” the spokesman was quoted as saying by the Washington Times, which broke the story on March 9.

As part of the covert war on Iran, the U.S. and Israeli governments have reportedly been arming, training, and funding the MEK for years — as well as other known terror groups such as the al-Qaeda affiliate known as the Libyan Islamic Fighting Group (LIFG) during the recent “regime change” in Libya. And providing support to a designated foreign terrorist organization remains a serious crime, punishable by steep fines and long prison sentences. Whether anyone will be held accountable, however, remains to be seen.

by Alex Newman , The New American