Rudolph “Rudy” Giuliani, the former mayor of New York City during the time surrounding the tragic

events of September 11, 2001, is now coming out in support of terrorism.

As absurd as it sounds, it is unfortunately true. He has voiced support for the terrorist group known as Mujahedin-e Khalq (MEK), even going as far as to claim that supporting terrorism is the only thing that can stop the Iranian nuclear program.

Keep in mind; this is the same group which, according to anonymous U.S. officials, is working with the Israeli intelligence agency Mossad to carry out terrorist attacks and assassinations in Iran. 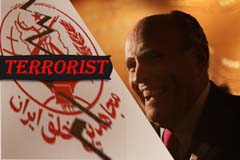 According to the International Business Times, Giuliani made these disturbing statements at a press conference earlier this week in Paris, France.

It is impossible to deny at this point that this terrorist group has some very powerful allies in Washington.

The MEK is still officially listed as a foreign terrorist organization by the U.S. State Department, which makes one wonder how anyone except these Washington players would be treated if they openly expressed support for an organization like al Qaeda, al Shabaab or the Revolutionary Armed Forces of Colombia (FARC).

Something tells me that if you were not in such a position of power, you very well might be targeted as a supposed supporter of terrorism.

Seeing as providing “material support or resources” to any organization on the State Department’s list is actually a crime, one must wonder how these people supporting and promoting the MEK are not held accountable for their actions.

However, these are not the only political figures who have been paid to speak by the MEK. Indeed, others include former Vermont Governor and Democratic National Chairman Howard Dean, retired General Wesley Clark, Chief of Staff for the Bush White House Andy Card, former Governor of New Mexico Bill Richardson and former Representative Lee Hamilton, who incidentally was the co-chairman of the 9/11 Commission.

How these individuals who claim to be opposed to terrorism and so often point to the tragic events of September 11, 2001 as justification for the erosion of our freedoms can turn around and openly support a designated terrorist organization is beyond comprehension.

Giuliani was invited to the conference in Paris by the French Committee for a Democratic Iran. It is unclear if he was paid and if so, how much he actually received, but Giuliani charges up to $100,000 for every speaking engagement so one must assume it didn’t come cheap.

The United States Treasury Department alleges that groups like the French Committee for a Democratic Iran actually act as a front, allowing for funds to be funneled to speakers by the MEK without having any direct ties.

“This is an utter lie and there is not even a scintilla of truth to it,” MEK spokesman Hossein Abedini said in a statement which was prepared to respond to the allegations.

“The MEK, as the legitimate opposition to the clerical regime, enjoys international recognition in Europe and the U.S. The objective of this failed propaganda is to weaken the widespread public support of the members of Congress, officials and scores of U.S. generals for … revoking of the illegitimate and unjust terror listing of the MEK,” he added.

The MEK has a long and ugly history of terrorist activities, although they claim to have stopped such actions.

However, the MEK is widely regarded as having assisted Saddam Hussein in crushing the uprisings in southern Iraq in 1991 and even participated in or helped with the massacre of Iraqi Kurds.

Suffice it to say, it is nothing short of disturbing to see anyone, especially these high-powered former officials, openly supporting terrorism and the murder of innocent people.

The fact that every single person involved with the MEK is not being investigated and arrested shows just how little our government actually cares about fighting terrorism. In reality, the “War on Terror” is just a flimsy pretext to engage in neo-colonialist adventurism abroad while robbing us blind and stripping us of our rights here at home.

A Message Addressed to Terrorists

Some participants in the rally had no knowledge about MKO