LAS VEGAS — The contractors who run the Nevada National Security Site, formerly the Nevada Test Site, have been scrambling to find new missions to keep the facility alive. And with its wide

But how would taxpayers feel about using public dollars to train foreign insurgents, including some who are officially considered to be terrorists?

It’s never really clear how these things can turn out, and sometimes such operations can backfire. For example, in the mid-80s, America trained and armed Afghan rebels to fight against the Russian army. Those same Afghans later joined the Taliban and have used the training we gave them to kill American soldiers. 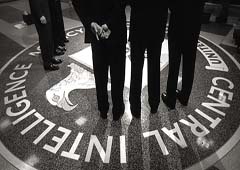 Nationally known journalist Seymour Hersh reported this month that the U.S. government paid to train Iranian provocateurs, presumably to cause trouble for the current government of Iran. But it turns out the government considers these guys to be terrorists.

The test site has emerged in recent years as a top training facility for all sorts of classified programs, including special ops teams and anti-terror units, and it appears foreign operatives are part of the mix.

"The first units of the MEK to show up in Nevada in late 04, early 05, and it was months and months of training," investigative reporter Seymour Hersh said.

The Pulitzer Prize winning reporter broke the story in early April, alleging that a rabidly anti-Iranian faction known as the Mujahedeen e-Khalq, or MEK, was at Area 12 on the test site for months of Special Forces training. Area 12 has been used many times as a base for sensitive operations, including training for the agents who guard American nuclear bombs. It has barracks and facilities to house scores of troops, or in this case, insurgents.

According to Hersh, the training focused on high-tech communications tactics, the kind that involves spy drones, as well as explosives training and enhanced interrogation techniques, which might explain why Nevada saw so many flights of so-called rendition planes during the same period.

While Area 12 may have been the base for MEK, it is likely the special ops training took place in Areas 18 and 19, where the terrain is remarkably similar to that of Iran. Hersh reported that the MEK training was overseen by the Joint Special Operations Command.

A spokesman for that group said the report is "not true at all, that the command was not involved in training MEK." So, if it took place, another agency, possibly the CIA, gave a cover story to the contractors who run the test site.

It’s not the first time southern Nevada has been used for insurgency training. In the mid-80s, dozens of Mujahedeen leaders from Afghanistan were trained in explosives, sniper techniques, and other guerilla tactics out in Sandy Valley by decorated Green Beret Colonel Bo Gritz, the real life model for the movie Rambo. They were then unleashed on Russian forces in Afghanistan.

And just after the events of September 11, the CIA trained Iraqi exiles known as the Scorpions at the test site.

"The CIA was considering sabotage, assassinations, and other aggressive actions to try and provoke a war with Saddam and destabilize his regime, all of this long before Congress authorized the invasion of Iraq," said Michael Isikoff, the author of "Hubris."

The big surprise is not that training took place in Nevada, but who was being trained. MEK is listed by the U.S. State Department as a terrorist organization, and for good reason. For years, it was a paramilitary arm of Iraqi dictator Saddam Hussein, carrying out bombings and assassinations.

In the 70s, MEK assisted in the takeover of the American embassy and the Iranian hostage crisis. It is widely blamed for murdering American military personnel and contractors in Iran and is widely despised.

"They are pretty much universally reviled by ordinary Iranians who doesn’t like their own government but really don’t like the MEK because they fought alongside Saddam during the Iraq war," said Jamal Abdi with the National Iranian American Council.

Hersh believes the training of MEK ended with the Obama administration but the operatives educated in Nevada are currently active in Iran and are believed responsible for a string of assassinations of Iranian scientists.

In the U.S., MEK is spending huge sums to buy political support so it can be removed from the terror list and perhaps take over if the Iranian government is overthrown. Abdi says American support for MEK is a dangerous idea.[..]

Former Homeland Security Director Tom Ridge is among the three dozen or so American politicians who accepted big money from MEK supporters to say nice things about the group. Calls for comment from Ridge were not returned.

There are prominent people in both parties who think MEK might be the United State’s best option if there is a regime change inside Iran. But again, fomenting that kind of change is dicey business.