Rajavi had a lot of houses, mansions and gardens in Baghdad. Some of them were located

outside the organization‘s bases and members didn’t know about them and some of them were inside the group bases, they were used as Rajavi’s private place or his office. A number of Rajavi’s mansions in Baghdad included:

1. Ramsar recreational centre in Habania Region: there were a few luxurious villas by the side of Habania Lake. It was considered as one of Rajavi’s clandestine bases. A very few members knew about the place. Maryam and Massoud Rajavi used to go there for vacation sometimes. They didn’t take there all of their security guards. They used to go there by the company of a very small number of the most reliable cadres.

2. Safe base in Al-Musbah region: it was a two –story building, completely furnished, neighboring two safe houses of Iraqi Intelligence service. The base was granted to the group for Rajavi’s meetings with Iraqi Intelligence officials. Sometimes, Rajavi had a short stay in the base before the meeting with Iraqi authorities and then an Iraqi agent escorted him to the meeting.

3. Babaiee base in Abu Nowas region: it was a building in a beautiful region opening to Dijla river. This was also gifted to the MKO by Iraqi Intelligence, used for visits between Rajavi and Intelligence authorities or for short-term stays.

4. Anzali Base in Aras Hinda region: the complex was again granted to Massoud Rajavi by Iraqi Intelligence. It was by the side of safe houses of Iraqi Mukhaberat (intelligence service) and used for visits with Intelligence officials.

5. Andolos base: the MKO owned several hotels and a lot of large and small houses in two avenues near Andolos square in Baghdad. Some of the bases were Saadati Seifi,Jalalzadeh,Tabatabaiee,Bakaiee,Zabeti,Dadashzade,Talar Baharstan, Malek marzban and Akbarzadegn.. . After the Kuwait War ended, two four-meter-height walls were built at the beginning and ending of the two avenues and large iron gates were installed at the two ends. There were other houses owned by Iraqi citizens who had difficulty to live there under security restrictions so gradually they sold their houses to the MKO and left the region. Thus the place turned into a strong castle in the heart of Baghdad. (This is exactly what Maryam Rajavi has done in Ouver sur d’Oise, Paris. She is expanding the base. They may own a large dangerous stronghold in heart of Europe in near future. It is now an isolated place to bar members from the outside world). Some of the houses located in andolos base were as followings:
a. Base Seifi: the base was Rajavi’s home in Baghdad in 1986. The first meetings with Iraqi authorities took place in that building. The houses neighboring Seifi base were evacuated and the street were blocked at both ends. Iraqi Security guards and MKO guards were protecting the base all the time. The basement was consolidated as a trench.
b. Base Bokaiee
There was a gorgeous building on Second Street of Andolos base. It was reconstructed like a palace-which was used for Rajavi’s meetings and receptions.
c. Building B: Ultimately Rajavi’s main base was a large 4-story building called “Building B” in an alley on second street. It was exactly located behind another building called ‘’Building A”. It contained 5 story and 100 rooms. It was kept empty all the time in order to protect Rajavi. It was only used a few months of the year for a limited number of authorities and forces who came to Iraq from abroad.

Later, they built a conference hall called “Talar Baharestan” to hold the group meetings there. In 1995 the hall was used for ideological sessions called “Hoze” where Rajavi threatened the forces that they would not be sent out any more. Anyone who was willing to leave the group, had to stay in “departure prison” for two years in order to remove his information, then he would be handed over to Iraqi Intelligence that would in its turn try them for illegal immigration to Iraq. There they would be imprisoned for eight years and later they would be exchanged with Iraqi war prisoners and sent to Iran. In the meeting, he spoke of “Iron fist”. He said that he would reply his opponents by “Iron Fist” and the help of Iraqi Intelligence.)

Note on Hotel Nofotil, Baghdad: Hotel Nofotil was located in front of Andolos complex which was like a huge castle. The hotel opened to the street where Rajavi’s house was located so it was considered a security problem so the organization rented two floors of the hotel at a very high fee. It was always empty to guarantee Rajavi’s security although Rajavi used to stay in Baghdad only three or four months of the year.

When I was a member of security unit in Baghdad, besides a large number of Iraqi forces about a hundred people used to protect Rajavi’s bases day and night.

Camp Ashraf
Various bases were built for Rajavi at camp Ashraf. Some of them were the followings:

1. Temporary houses next to Ashraf conference hall: exactly by the side of Ashraf conference hall, there were two temporary houses allocated to Rajavi. The first house had several rooms for reception and accommodation which was situated on the Southern side of the hall. The other house was on the South-Western side. It had a yard with planted parterre, bedrooms, living rooms and bathrooms. The house was built after some changes were made in the conference hall and Rajavi’s tribune was moved to another part. The houses were used only when Massoud Rajavi held public meetings in the hall. He was received there while he was taking a break between meetings.

2. Permanent base in commanding headquarters: this was a luxurious, large palace between St.400 and St.600. It had various buildings and large basements (shelters).it was never said to the MKO forces that the place was Massoud’s house but gradually members told each other.
The following picture shows protecting area around the palace. The blue arrow shows the underground shelter and the green arrow shows the small hall of the headquarters. On the north-Western part of the complex, there was a private shooting hall that was for Massoud Rajavi’s shooting practice. 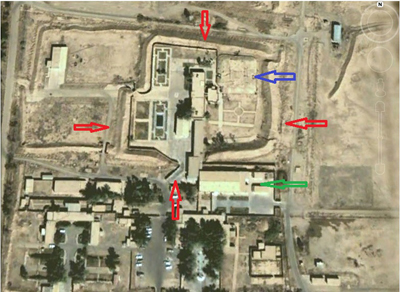 3. Anti-bomb shelter and palace on St.100: on the Western side of water filtration plant of Camp Ashraf, on the corner of St.100 and St.400,a well-equipped ,luxurious and anti-bomb house was completely secretly built by Iraqi engineers and contractors. Members of the group were totally unaware of the existence of such a shelter. They were told that an underground water storage was established there!

The new base was built at millions of dollars cost and was named “Simorgh”. It contained a large green area around a central building with dozens of rooms and halls with a complicated plan. It took near three years to build the whole complex. The base was furnished with the most expensive and the most luxurious furniture that was purchased in Europe and brought to Iraq. It was said that the base was copied of a Saddam Hussein’s anti-nuclear bombs palace, for emergencies. 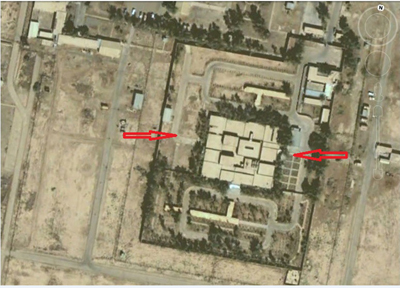 Massoud Rajavi lived in this base during his long-term clandestine life after 2003.