Iran nuclear threat! It was first propagated by fear monger propaganda arm of the Mujahedin Khalq Organization (MKO): National Council of Resistance of Iran (NCRI) in August 2002.Since 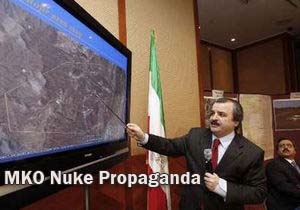 then the group has focused its multi-million propaganda and lobbying campaign in the US and Europe on spreading the same undocumented intelligence.

The MKO’s new propaganda report on Iranian nuclear program is another futile effort to regain the credit it attained nine years ago when it once revealed Iran’s nuclear program. The group has several times repeated those allegations or tried to apparently launch new cases of crisis between Iran and the West.

Regarding the current situation of the MKO weather in Iraq or in the international community, you may find out the critical difficult conditions the group leaders are stuck in.
The fifth group of Ashraf residents moved to Temporary Transit Location (Camp Liberty) last week while the group leaders are working hard to change TTL into a refugee camp which would be eventually handled by the United Nations instead of the Iraqi government.

Writing letters to the UN and ICRC, they ask that TTL be considered as an asylum seeking camp. They condemn Martin Kobler, UN special representative in Iraq for he considers TTL as a standard transit site. The MKO leaders strategically label anyone who doesn’t get along with their goals as agents of Islamic Republic.

The recent so-called revelations on a facility in Iran for building nuclear warheads neither caused motivation to investigate the case nor concerned the world but it was faced with doubt. A top US expert David Albright, head of an influential Washington-based think tank ton Iran’s nuclear work and has access to sensitive intelligence said the NCRI report, like previous ones, should be treated with great skepticism according to Reuters. [1]

Considering the annoying fact -for the MKO leaders- that last month’s nuclear negotiations between Iran and the EU foreign affairs chief Catherine Ashton went approximately well, the MKO is right to fear the outcome of future talks including the one on May23. The report of Reuters on the issue also reads:”its latest report, whose details could not be verified, appeared timed to encourage a tougher line at talks with Iran the UN nuclear watchdog will have in Vienna on Monday and Tuesday and six world powers will hold in Baghdad on May23.”[2]

In addition, the MKO panics the US State Department’s alarming decision on its terrorist designation. The leaders of the group think of new alleged revelations for flirting US government. Justin Raimondo of antiwar website also writes of the appropriate time for warmonger’s campaign.

“yet it’s all about the timing: as the US-Iran nuclear talks loom, the prospect of our State Department in effect legalizing the MEK and its activities in the US is an open provocation that could possibly shut down the sensitive negotiations-and pave the way for war with Iran”, he writes.” no doubt hardliners within the Obama administration are using the MEK issue as a backdoor way to torpedo the Baghdad talks whether they will succeed remain to be seen.”[3]

The so-called revealing report on Iranian explosive building site includes a satellite photo marked by some arrows and circles alleging that the building is suspected to contain an explosive chamber! Albright told Reuters :”We have to be extremely skeptical of whatever they say.” He asserts that the NCRI’s intelligence information has no evidence and one cannot verify its accuracy. [4]

As an independent American Journalist, Madison Ruppert writes,” not a single one of these claims can be substantiated.”[5]

Ruppert denounces the MKO’s tactic in document making “Interestingly, the document took a tactic right out of the US government playbook – creating diagrams supposedly showing the hidden command structure, scientists and engineers involved in this alleged secret program”, he reveals.[6]

Gotten along with their warmonger supporters, the MKO does not hesitate to try any tricks that might prolong its existence whether in Iraq or in the West. The tricks may include justifications for another war in the Middle East. Rajavi’s Chalabi style revelations definitely hopes for Iranian version of Iraqi National Congress probably called National Council of Resistance, in future Iran. ”That sounds much like the completely fraudulent diagrams and drawings created in order to trick people into buying justification for invading Iraq,” Maddison Ruppert suggests. [7]