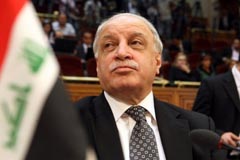 reiterating that Baghdad is determined to expel the terrorist group.

Abawi said in a statement that MKO’s presence in Iraq does not meet the description of asylum, and stressed that Baghdad is determined to close the terrorist group’s main training base, Camp Ashraf, and drive MKO elements to another country.

He reiterated that MKO’s presence in Iraq has not justification, saying, "The elements of the MKO are illegal . They came to Iraq and were used by the former regime for military purposes, they are not refugees because according to the Iraqi law they don’t qualify for asylum."