On the morning of Friday, 11 December, 1981, an elderly Iranian cleric Abdol Hosein Dastgheib was assassinated by Mojahedin Khalq assassins in the city of Shiraz while he was leaving his 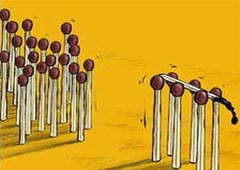 house for the Friday prayer. The assassin was a 19 year old female who was later recognized as Gohar Adab Avaz.

The assassination was a unique act of terror practiced by the MEK in which a human being was used as a living weapon. Pretending to be pregnant, she told the victim’s security people that she had a letter for the Grand Ayatollah and was willing to give the letter to him personally, while under her clothing she was wearing a powerful hand-made bomb.

In the early 80s the MEK practiced other acts of terror, among which were other suicide bombings. It was a new method in the recent history of Iran that an armed group used its members as bombs and sent them on suicide missions for terrorist activities. A method that later on was widely used by other notorious terrorist groups such as Al Qaida. Dr Abbas Milani says in an article in The National Interest, "eventually the MEK fell foul of the regime and began to fight the power holders in Tehran. Young men and women were sent in droves to armed street demonstrations. Khomeini’s regime responded with remarkable brutality, slaughtering thousands of the organization’s members. The group returned the favor and killed, by its own claims, more than two thousand regime leaders. MEK was in fact the first group in Iran (and arguably in the region) to use suicide bombers."

Obviously it takes a great deal of effort for a group to convince its members to perform suicide acts of terror. The MEK has precisely proved that it is capable of doing so. The group enjoys a cult like structure that denies family relations and members must attend daily confession meetings on their behavior and thoughts as well as their sexual feelings. Opposing members are arrested, imprisoned and tortured by their own comrades.

Justin Raimondo writes in an article in Antiwar, "MEK has been described as a cult, most notably in a scary report by Human Rights Watch, a fascinating Al Jazeera video report, and in a remarkable piece by Elizabeth Rubin in the New York Times. Rubin relates the testimony of Salahaddin Mukhtadi, an Iranian historian living in exile, who says dissident MEK members “are locked up if they disagree with anything and sometimes killed.” In the MEK cult, having particular friendships is strictly forbidden: sitting and talking together is considered a crime, especially when the subject is one’s past life before joining the cult. Wives are ordered to divorce their husbands, celibacy is mandatory, and families are broken up; nothing must come between the members and their devotion to the cause. Forced confessions and “criticism sessions” occur on a daily basis, in which participants are subjected to group abuse called “ideological cleansings.”

The process of mind manipulation that was used by the MEK is not only still practiced, but has been further developed. The group has specifically defined and delved into newer methods of brainwashing and takes advantage of isolating its own members from the outside world.

According to an internal speech of the group`s leaders which has been leaked out by ex-members and is posted on YouTube, the Rajavis say that a member of the MEK has to offer their blood and breath to the leadership. They continue that, if any member is not willing to offer his/her life for the cause of the group, his or her life is Haram (forbidden).

What makes MEK scarier is that the group has never taken any practical step to distance itself from its history of violation and terror. As mentioned, the process which led members of the organization to become walking bombs is deeply developed and the power-thirsty leadership which proved itself ruthlessly able and willing to sacrifice all the members on their own behalf is still running MEK.