Mayor of Khalis warned yesterday of a possible explosion of Iraqi people’s wrath over the delay of the expulsion of remaining MKO members at Camp Ashraf. 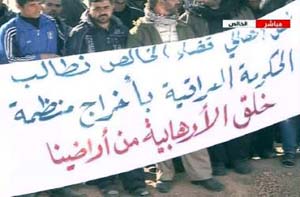 According to Habilian Foundation website, Uday al-Khadran said Tuesday that they wanted the central government in Iraq to “forcefully close down Camp Ashraf,” since it is a terrorist group and is “responsible for killing thousands of Iraqis over the past three decades.”

“MKO is not committed to the agreement signed with the United Nations”, he said, adding, “This is why the expulsion has been postponed till after (Islamic holy month of) Ramadan.”

The relocation is in line with the memorandum of understanding signed on 25 December between Iraq and United Nations to temporarily transfer them to a former US military base for the UNHCR to determine their refugee status.